Aquino to US: Speak up on West PH Sea 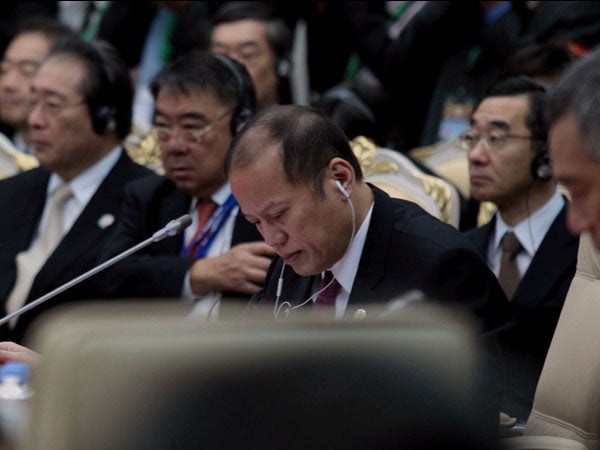 PHNOM PENH, Cambodia–– As the show of unity among Southeast Asian leaders appeared to crumble over differences in the approach to South China Sea (West Philippine Sea)  tensions, President Aquino pointedly asked the United States on Monday to be involved in the discussions, a move likely to anger China.

“It is especially vital to have the world’s largest national economy involved in the discussions considering the interconnectedness of our current milieu,” he told an audience that included US President Barack Obama and fellow leaders in the Association of Southeast Asian Nations (Asean).

Aquino’s call came at a particularly sensitive time during the 21st Asean Summit and related summits here after he openly rebuked host Cambodia’s Prime Minister Hun Sen for saying a consensus had been reached not to internationalize the issue.

He said the Philippines and another country, later identified in news reports as Vietnam, did not agree to exclude other parties from the negotiations with China for a solution to the raft of territorial disputes in the South China Sea, a portion of which Manila calls the West Philippine Sea.

China has long insisted that the disputes should be resolved through bilateral or country-to-country talks and opposed the involvement of external parties such as the United States, while the Philippines has pushed for a multilateral solution.

Addressing the 4th Asean-US Leaders Meeting, one of the side summits here, Mr. Aquino said the United States, the Philippines’ most important ally, had a role to play in the discussions, especially in light of its touted “pivot” to the Pacific to check China’s growing military assertiveness.

“Each one of our nations has a stake in the stability of Southeast Asia. The United States understands this and, for this reason, has chosen to work with us to ensure the peace and continuous advancement of our region,” he said.

Aquino said the US presence at the Asean summits “adds a special dimension to our regional discussions particularly on issues that have far-reaching political and economic implications.”

“Our region is very diverse and its harmony can easily be disrupted by sheer political, military, or economic might. Imbalance, as we know, may lead to instability,” he said.

“While we are all aware that the US does not take sides in disputes, they do have a strategic stake in the freedom of navigation, unimpeded commerce, and the maintenance of peace and stability in the South China Sea,” Mr. Aquino said.

He then proceeded to lay out the Philippine position that territorial and maritime disputes should be settled peacefully and in accordance with the rule of law.

“We continue to support the further inclusion of economies active in the region in these discussions. They serve to expand our capacities as an organization and they will certainly accelerate our progress in the pursuit of shared prosperity for the region,” he said.

Later in the evening, during a briefing for Philippine media at Sofitel, where Mr. Aquino was billeted, the President said the US, as the biggest economy, should not be left out of the talks considering its own stakes in the region.

“We recognize that they also have a right to say their piece and to be active in advancing also their interests. We have long said that if it’s a multilateral problem, you can’t have a bilateral solution,” he said.

Earlier on Monday, Aquino made a terse interjection as Hun Sen was bringing another side meeting, the 4th Asean-Japan Summit, to a close, in which, while summarizing the proceedings, the Cambodian leader said there was now Asean consensus to keep negotiations within an “Asean-China framework.”

At that point, the Philippine president raised his hand to object. “The Asean route is not the only route for us,” he said. Mr. Aquino said the Philippines, as a sovereign state, had the right to defend its national interest.

But in the media briefing, he said that besides Hun Sen’s statement about not internationalizing the issue, he had no other complaints against the host Cambodia, a close China ally.

“They allowed me to keep talking. I have no complaints. Actually (Hun Sen) even apologized when he did not immediately see me raising my hand…. They did not try to block what I wanted to say. There were no behind-the-scenes request for me to keep quiet,” he said.

Relations between Cambodia and the Philippines turned frosty after an Asean foreign ministers meeting in July when they tussled over the language of a customary joint communique that was supposed to be issued at the end of the talks.

Phnom Penh, the host of the 2012 summits, including the foreign ministers meeting in July, came under criticism when it rejected any mention of disputes of individual Asean states with Beijing, particularly Scarborough Shoal, which was then at the center of a maritime standoff between Manila and Beijing in the West Philippine Sea.

The deadlock stymied the issuance of a joint communique at the close of the meeting, the first time in Asean’s 45-year history, and critics alleged that Cambodia was acting under pressure from China, which did not want any references to the territorial disputes in the statement.

Asean members Vietnam, the Philippines, Brunei and Malaysia, along with Taiwan, have overlapping claims to parts of the South China Sea,  while China claims virtually the whole body of water as its own, often sparking maritime tensions.

The South China Sea is believed to hold vast deposits of oil and gas and is home to sea lanes through which half of global trade passes.

In April, a standoff that lasted months occurred between Chinese and Filipino forces over the disputed Scarborough shoal off Zambales province.