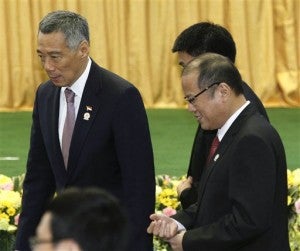 PHNOM PENH — Although nursing a fever, President Benigno Aquino III appeared chipper at the opening of the 21st Association of Southeast Asian Nations (Asean) Summit and related meetings here where he and other leaders were slated to discuss a wide range of issues facing the bloc.

Aquino, in a dark suit, strode briskly on the red carpet in the Peace Palace to take his place with nine other Southeast Asian heads of states or governments in ceremonies led by Cambodian prime minister Hun Sen on Sunday morning.

On Saturday fears abound Aquino would not be able to make it due to his illness, but he pushed through with the trip in order not to jeopardize Philippine interests in region-wide issues including maritime tensions with China in the West Philippine Sea.

He arrived at 8:40 p.m. Saturday aboard a Philippine Airlines flight.

The government said it allocated P11 million for the Nov. 18-20 presidential trip. US President Barack Obama and Chinese Premier Wen Jiabao are among the world leaders expected to descend on the Cambodian capital for the Asean summit and its related meetings.

In a photo session, the 10 Asean leaders did the traditional Asean handshake following the welcome remarks of Prime Minister Hun Sen, who underscored the importance of increasing cooperation within the bloc and with its dialogue partners in the region.

“Maintaining regional peace and security is indispensable for Asean’s prosperity and inclusive growth in the entire Asean region. In this

regard, Asean has to further strengthen its capacity and role in the discussions and cooperation mechanisms with Asean dialogue partners,” he said.

Later Sunday, the President is expected to join the plenary session, as well as the signing of the Asean Leaders Statement on the Adoption of the controversial Asean Human Rights Declaration.

Asean foreign ministers decided on Saturday to insert a fresh paragraph to the draft of the declaration in a move seen to address criticisms that the document did not adhere to international human rights standards.

Aquino will also attend an Asean leaders meeting with the Asean Business Advisory Council, the Asean retreat session, and, later in the day, he will hold a bilateral meeting with India’s prime minister.