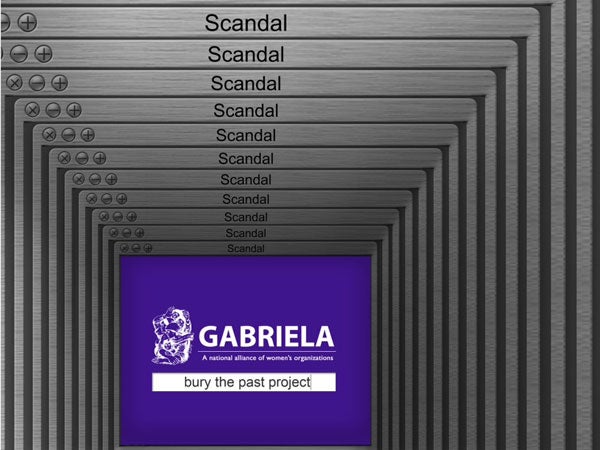 MANILA, Philippines – There’s a new team of players in the digital arena of advertising, and they’ve got their eyes on the Gold.

DM9JaymeSyfu continues to advocate for women’s rights through its latest creative and digitally progressive campaign, Gabriela’s “Bury the Past.” By moving in the digital direction, they went beyond the usual mediums and dipped their feet in a medium that is not limited by time, distance, or space. They were no less than successful in this endeavour, as the campaign was an effective weapon to fight Electronic Violence Against Women (EVAW) using social media.

Social Media has grown exponentially, and while it benefits us in countless ways, it is also one of the leading contributors to the proliferation and consumption of online sex scandals. In the Philippines alone, there are more than 300, 000 searches for sex scandal videos per day.

With such an alarming statistic in mind, the “Bury the Past” project was born. DM9, outfitted with a digital genius and a strong team of creatives, realized that they could help put a stop to the spread of online sex scandals. It occurred to them that there was more to social media than the “usual campaign in which people Like a page and Retweet an invitation asking people to get in their car and drive to a mall where they would register at the gate just so they could get into the venue of a rally to gather signatures to submit to a public official who may or may not do something,” Aste Gutierrez, Associative Creative Director and copywriter, explains.

The idea was simple, with massive results. By urging people to add “-Scandal” to their surnames on Facebook, every person became an active participant of the campaign. Everyone’s involvement bombarded the search engine optimization with an avalanche of “scandals.” This buried actual sex scandals in more than 30 pages of search results, effectively “Burying the Past.”

The campaign was wildly successful, generating earned media worth 1.2 million US dollars, on top of the millions from wide media coverage. This was one small step for DM9 in the digital landscape, but a giant leap for victims of EVAW, proving that “you don’t really need sophisticated or complicated executions for digital. What you need is a simple, but strong idea and an excellent strategy,” according to Eugene Demata, DM9’s Executive Creative Director.

The collaborative efforts did not go unnoticed. “Bury the Past” garnered Silver at the Asian Spikes Festival for Direct, while being shortlisted in the Digital Category for Integrated Digital Campaign. It went on to win Silver in the London International Advertising Awards, adding to DM9’s growing cache of metals for digital. These all led up to its latest victory, a bright and shiny Gold in the Digital Asia Awards, proving once again that even a small creative shop of 34 can hold its own in any arena.

Much more can be expected from DM9 in the coming year, especially on the heels of their recent successes and their expanding knowledge and experience in the digital space. “I really believe Social Media can only be relevant if it’s used to change or transform people’s lives. And, that was the beauty of this simple idea,” says Merlee Jayme, DM9JaymeSyfu’s Chief Creative Officer, in recognition of the power of social media and on the Gabriela campaign. With their ability to utilize social media to effect positive changes, we can be certain that DM9 will be hungry to explore the digital medium even more.

After having already established themselves as one of the Philippines’ most well awarded advertising agencies among other various mediums, it might be time for DM9 to consider making some space on their shelves for the Digital Category. (advt)

Read Next
Palace says Aquino to fly to Asean summit despite flu
EDITORS' PICK
How to lose a PH genius: Wesley So officially a US citizen
Every Filipino home can now be a smart home with realme TechLife
Nestlé Philippines’ ‘NESCAFÉ Plan’ bags Grand Anvil at PRSP 56th Anvil Awards
Smart reinforces superiority with best speed and mobile video experience in PH
New 3,045 COVID-19 cases push PH total active cases to 40,074
LTO’s P500-M deal for screws draws scrutiny
MOST READ
Robredo on Sara Duterte leading poll surveys: Why are Filipinos drawn to leadership of this kind?
How to lose a Filipino genius: Wesley So officially a US citizen
Duterte order to police, military on Reds: ‘Kill them all’
Kris Aquino dispels rumors on son Josh getting married, thanks Ogie Diaz for defending him
Don't miss out on the latest news and information.