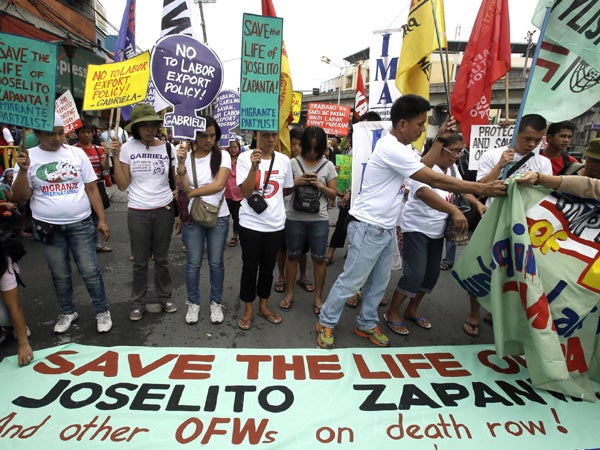 Protesters display placards during a rally near Malacañang Tuesday to call on the government to intercede to stay the scheduled execution of convicted overseas Filipino worker Joselito Zapanta and all other OFWs in death row in the Middle East. AP

The government of Saudi Arabia has stayed the execution of Filipino migrant worker Joselito Zapanta by four more months, giving his family more time to raise blood money to settle with the family of his Sudanese victim.

“The very good news is that the execution was stayed. He was given a deferment of four months,” said Binay.

He said the stay was “supposed to be nonextendable and nonnegotiable,” the official said.

The Vice President had appealed to the Saudi King to extend the stay on Zapanta’s execution and blood money settlement saying his family in Mexico, Pampanga was very poor.

Binay appealed to Filipinos and the private sector to raise funds for Zapanta’s blood money.

He also commended the Philippine Embassy for keeping close watch on the Filipino’s case.

“Up to the last minute, they did not stop looking for ways to extend the deadline.  We want to change the notion that the government did not do anything, especially the Embassy,” Binay said.

Another overseas Filipino worker (OFW) on death row, Rodelio “Dondon” Lanuza is also feverishly trying to raise 3 million riyal (about P33 million) in blood money  to escape his own execution. Lanuza was convicted of killing a Saudi national but he said it happened in self defense. An earlier statement from the Embassy said the family of the Saudi victim also expressed willingness to forgive Lanuza if he could raise the money.

It was reported that in the Middle East, at least 27 OFWs, including four women, are facing the death penalty.