Sotto finds when it rains, it pours 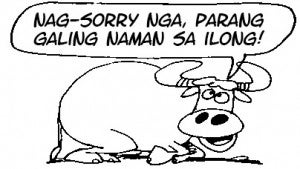 The issue, sir, is intellectual dishonesty, and no longer the reproductive health (RH) bill.

Academicians reminded Senate Majority Leader Vicente Sotto that the ethics complaint they filed against him was about his lack of candor about his sources and his “arrogant denial” that he copied material without attribution when he delivered three speeches against the contentious measure months ago.

Led by Dr. Sylvia Estrada-Claudio of the University of the Philippines Center for Women’s Studies, the informal group trooped to the Senate Tuesday morning to file a 21-page complaint charging Sotto with violation of the Intellectual Property Code of the Philippines.

But Sotto insisted in a text message that the “brouhaha” stemmed from his opposition to the RH bill, adding he welcomed the complaint, as it allowed him the chance to explain his side of the story.

Claudio told the Philippine Daily Inquirer that Sotto was expected to adhere to a higher standard of intellectual integrity.

Kenneth Theodore Keng of Filipino Freethinkers Inc. said  senators and others “who have been elected, have real power and supposedly (occupying) esteemed positions” should be held to a higher standard when it comes to intellectual output.

Keng noted that Sotto had already dismissed his critics as “just bloggers,” yet netizens “need to be very, very careful with everything we say to make sure it is verifiable.”

Claudio said that plagiarism “is a difficult issue for academicians, especially since some sectors insist that it is an issue exclusive to academics.”

She also questioned Sotto’s insistence that the ethics complaint is simply a “pro-RH effort and that we are doing a demolition job.”

Claudio said that while many of those who cried foul over Sotto’s plagiarized statements are also supportive of the RH bill, it did not follow that all signatories to the ethics complaint were pro-RH.

“Those of us who are pro-RH have indeed issued statements, but we never plagiarize, we never misinform and the issue of intellectual honesty where plagiarism stems from (is about) being truthful about your sources and giving the right information,” she added.

Claudio lamented that while young children were taught not to cheat as part of basic values, it was disturbing that Sotto claimed that he was not guilty of plagiarism and that it was not considered a crime in the Philippines.

The complaint that carried the names of Claudio, Keng and 36 others including the Freethinkers contained a chart that showed portions of Sotto’s three speeches against the RH bill on the left and the “original text” from articles he supposedly copied from on the right.

The academicians alleged that Sotto’s Aug. 13 speech for example, copied “near verbatim” a blog entry posted by US-based writer Sarah Pope about Dr. Natasha Campbell-McBride’s warnings on the use of the pill.

The group said the Aug. 15 anti-RH speech also contained portions from a study titled “Truth About Contraceptives” and another work he should have credited to “C-FAM” about the United Nations agencies’ efforts to influence religious thinking on contraceptives.

Sotto’s Sept. 5 speech translated into Filipino portions of a 1966 speech of the late US Sen. Robert Kennedy that was delivered in South Africa at the height of apartheid.

The complaint charged Sotto of refusing to acknowledge that he copied portions of his speech “from these authors without giving them proper attribution.”

Critics charged that when Sotto took the microphone on Aug. 29 after the plagiarism accusation came out, Sotto, speaking in Filipino, asserted that “plagiarism is not a crime in the Philippines,” and merely asked that the portion of his speech discussing McBride be stricken off the Senate records.

“To this date, … Sotto has not owned up to the nine instances of copying without attribution in the three parts of his turno en contra speech… Neither has he, since then, given proper attribution to any of these authors from whom these works were copied,” the complaint said.

Claudio said the group was in touch with the four US-based bloggers who had expressed interest in signing the complaint but had logistical problems.

The group twitted Sotto’s claim that plagiarism was not a crime in the Philippines saying a decision written by former Supreme Court Associate Justice and now Chief Justice of the Philippines Maria Lourdes Sereno in her dissenting opinion on a similar case against colleague Mariano del Castillo noted that “plagiarism, with its lack of attribution, severs the connection between the original author’s name and the work.”

“A plagiarist, by falsely claiming authorship of someone else’s material, directly assaults the author’s interest in receiving credit,” the quote from Sereno’s opinion said.

Later in the afternoon session, Sotto apologized to the family of the late US Sen. Robert Kennedy for using a portion of Kennedy’s 1966 speech in his third speech against the RH bill.

Still, Sotto insisted that “copying or imitation is the greatest form of flattery” in justifying the inclusion of part of Kennedy’s “Day of Affirmation” speech.

Sotto added that his office had been in touch with representatives of the Robert F. Kennedy Center for Justice and Human Rights and has explained the situation to them.

“According to the one we talked to in the foundation, they were made to believe that I mangled the speech,” Sotto explained.

Kennedy’s daughter Kerry, a human rights activist, earlier accused Sotto of “flagrantly and deceptively” plagiarizing her father’s speech and asked that the senator apologize for “his unethical, unsanctioned theft of Robert Kennedy’s intellectual property and the intellectual property” of the US-based bloggers.

“In addition, I am particularly offended to see a speech my father gave in support of global human rights distorted by Senator Sotto as an argument against the right to contraception,” she added.