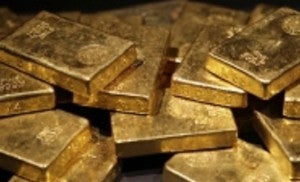 Four lawmakers are urging the Bureau of Internal Revenue (BIR) to suspend the tax on gold as it has drastically reduced the volume of the metal sold by small-scale producers to the Bangko Sentral ng Pilipinas (BSP).

Officials and traders said the gold tax—made up of a 5-percent withholding tax and a 2-percent excise tax that the BIR started to enforce last year—was the biggest factor behind the spike in gold smuggling.

The 7-percent tax, usually borne by the traders, is imposed on gold sales to the BSP.

Gold smuggled out of the country, much of it going to China via Hong Kong, has resulted in a 95-percent drop in gold purchases by the central bank. Under the law, small miners should sell their gold to the central bank.

Cagayan de Oro Rep. Rufus Rodriguez said Internal Revenue Commissioner Kim Henares should immediately scrap the tax, while Sen. Gregorio Honasan Jr. suggested that the tax be suspended until the BIR had plugged all the loopholes in the tax system.

“The gold tax is a glaring case of bad taxation. It is doing more harm than good because it is a big flop in raising government revenue and it is hurting our financial stability,” Rodriguez said.

He noted that the biggest victims of the excise tax were small miners from Mount Diwalwal in Mindanao.

Honasan, a member of the Senate ways and means committee, said: “I don’t think we should continue with something that is clearly not working as expected. I agree that gold should be taxed, but I don’t think it should be done this way. The BIR must come up with a better strategy on how to tax gold sales but until then, it should  put this to a stop.”

The Mines and Geosciences Bureau (MGB) reported that gold  production fell 26 percent to P51.21 billion in the first half largely due to the 95-percent drop in gold purchases of the BSP with the imposition of a tax (initially pegged at 12 percent in October last year and reduced to 5 percent in April this year).

The MGB estimated that the central bank purchased only a little over 9 percent of all the gold produced in the country, down from 74 percent a year ago.

“Obviously, smuggling accounts for the low gold inventory. But the trouble with lifting the tax is it will benefit equally the big-time gold mining companies and not just the community miners who eke out [a living by producing] a few ounces every day and who are most prone to avoid taxes,” Aggabao said.

Aggabao said that while he believed that the tax should stay, the BIR should get its act together.

“True, the tax fosters a lucrative parallel gray market, but the solution is stricter oversight, especially on small mining activities,” he said.

Antonino said the BIR should explain in a hearing the result of the implementation of the gold tax in the last 12 months to enable members of the House ways and means committee to act on the troubling decline in gold reserves.

Patrick Caoile, treasurer of the Philippine Mine Safety and Environment Association, said the BIR clearly “miscalculated” the gold tax as it not only failed to deliver the targeted increase in revenue, but also put at risk the country’s gold reserves.

“The BSP needs to replenish its gold reserves. The BSP normally gets its gold from small miners but since the gold tax forced them to ship out their haul outside the country, the BSP will be forced to buy gold from other countries and at a premium. It is possible that we might be buying the same gold that came from our small miners,” Caoile said.

“It’s been more than a year since it sapped the gold tax, and I doubt if the BIR has seen the pot of gold it has been looking for. The least the BIR should do is to take long, hard look at its gold tax policy. There is nothing bad in saying mea culpa,” Caoile said in a phone interview.

Prices to go up

Caoile warned the BIR against taking a hardline stance on the gold tax in the face of expectations that gold prices would shoot up from $1,700 to $3,000 per ounce amid a further weakening of the US and European economies.

“Many investors believe that the [reelection of US President] Barack Obama will lead American planners to double the money supply and increase inflation, an excellent scenario for higher gold prices. If our gold continues to go out due to the gold tax, our central bank will be forced to buy gold at higher prices,” Caoile said.

The report, which came out in August, said about 56 percent of that came from small-scale miners.

Leo Jasareno, MGB head, told Reuters that the government was aware that gold from small-scale mines either passed through traders on the black market or was sold directly from mines to foreigners coming in on a tourist visa.

“We have heard a lot of rumors about that—that it is being sold in Binondo (Chinatown),” he said.

Traders and officials say it looks like much of the gold is going to Hong Kong, the main conduit for gold flows into China.

Hong Kong’s top source of gold imports from 2005 to 2010 was the Philippines, official data from the Chinese territory shows. Philippine gold shipments to Hong Kong hit a peak of 81,471 kilograms in 2010, way above imports of just 11 kg nine years earlier, and were steady at 81,192 kg in 2011, according to Reuters.

Hong Kong customs regulations require that all trade or business related to gold shipments be registered with authorities, but they do not put restrictions on gold carried by passengers.

Official statistics in the Philippines, reflecting legal exports, show gold exports to Hong Kong in 2010 and 2011 at just around 3 percent of the total volume recorded by Hong Kong authorities.

The Philippine data represent only shipments by big mining firms with supply contracts, as exports of gold from small-scale mines are banned. Officials from the statistics office could not explain the discrepancy, saying the data were based on records of the Bureau of Customs.

The strong demand for gold in the Philippines is also shown by foreign groups placing regular ads in newspapers announcing “buying events” for gold jewelry at swanky hotels in Metro Manila.

The announcements, usually full-page ads, have been going on for months.