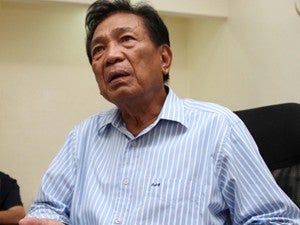 Abalos on Oct. 18 filed a motion in Pasay Regional Trial Court Branch 112 for leave to travel to Taiwan to meet with suppliers of bangus fry for his ailing fishpond business in Iloilo.

Abalos said he also wanted to meet with Taiwanese investors to discuss his plans to shift his aquaculture venture from shrimp production to milkfish raising.

“Recent developments in the aquaculture industry, particularly the steady decline in demand for shrimp coupled with the increasing complexity of prescribed shrimp culture practices and technology, has constrained the accused to shift the focus of his business from shrimp culture to the raising of bangus, if only to assure its continued viability,” Abalos said in his motion.

“Considering, however, the scarcity of bangus fry in the country, the accused is compelled to urgently source the fry from Taiwan,” the motion said.

But in a one-page decision, RTC Judge Jesus Mupas said that he found “no urgency for [Abalos] to travel to Taiwan.”

“The accused failed to convince the court that there is an absolute necessity for him to travel to Taiwan. Neither is there any showing that the absence of the accused… would preclude him from his opportunities in his aquaculture business, considering we have enough supply here of milkfish as per assurance of the Bureau of Fisheries and Aquatic Resources (BFAR),” Mupas said.

The court took into consideration the opposition to Abalos’ motion made by the Comelec which pointed out the BFAR had certified that there was no of bangus fry in the Philippines, and that in fact there was an ample supply, especially in Saranggani province.