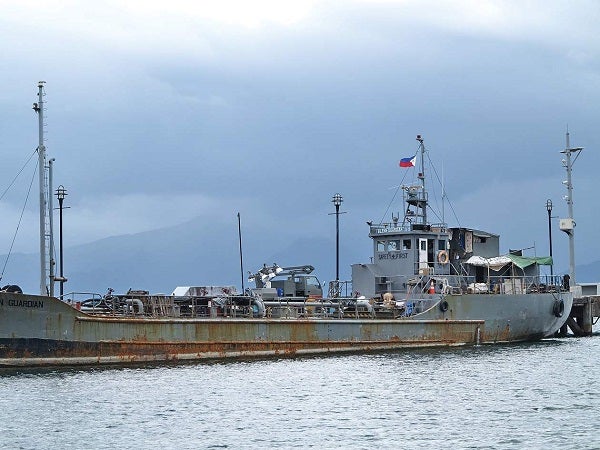 In a Nov. 6 letter, lawyers from the Villaraza Cruz Marcelo and Angangco law firm, who represent Glenn Defense Marine Asia, told the SBMA that the Presidential Commission on the Visiting Forces Agreement (VFACOM) was the sole and proper authority that should handle the concerns and issues it raised on the waste dumping incident.

The letter was signed by lawyers Kristoffer James Purisima and Bernard Joseph Malibiran.

“At the outset, it should be pointed out that our client provides marine husbandry and logistics support services (‘support vessels’) solely and exclusively to US Navy vessels visiting the Philippines pursuant to the provisions of the VFA between the Republic of the Philippines and the United States,” Purisima and Malibiran said.

The VFA provides the legal framework for regulating the presence of American military personnel and equipment in the Philippines, they said.

“It is clear that vessels operated by or for the United States armed forces—such as the support vessels of our client—may enter the Philippines upon the approval of the government of the Philippines and the movement thereof shall be the subject to mutually acceptable implementing agreements,” they added.

No mention of dumping

Nowhere in the letter did the company’s lawyers address the allegations that it had dumped waste water on Subic Bay; it only repeatedly cited provisions in the VFA exempting Glenn Defense Marine Asia from SBMA jurisdiction.

“Therefore, with all due respect, it is our client’s position that its support vessels are not commercial vessels that are subject to the regulation of your office. Rather, the support vessels solely operate for the benefit of the US armed forces under the stated provisions of the VFA. As such, said support vessels are in the country for at most several days per visit and engage in no other business or purpose except to service visiting US Navy vessels,” the lawyers said.

“Therefore, the operation of the support vessels is sui generis and beyond the regulatory framework sought to be enforced by your office,” they said.

The lawyers also cited provisions in the Vienna Convention on the Law of Treaties, of which the Philippines is a party, and said: “A party may not invoke the provisions of its internal or domestic law as justification for its failure to perform a treaty.”

They also said that Glenn Defense Marine Asia was a victim of a Filipino firm that alerted the SBMA about its supposed violations.

“We find it unfortunate, that interlopers with perceived competing business interests continue to harass our client and continue to lobby against the operations of its support vessels, thereby jeopardizing our country’s ability to comply in good faith with its treaty obligations and adversely impact on our national security as it gives rise to doubts on our dependability as a defense and treaty ally of the United States of America,” the lawyers said.

But SBMA Chairman Roberto Garcia said Glenn Defense Marine Asia was a registered SBMA locator operating within the free port. “Our position is that they are [bound by our laws]. They cannot claim that [the VFA is their defense],” he said.

Garcia said the SBMA would file charges against Glenn Defense Marine Asia for its environmental and seaport violations.

“If any ship comes and goes [within the free port], they have to notify the free port [authorities]. They didn’t,” he said.

Garcia added: “They claim we have no jurisdiction because of the VFA. I don’t agree with that. As far as I’m concerned, if they violate environmental laws—even if it’s the US Navy—they are liable.”

“If there’s a violation, the public has the right to know,” he said. Robert Gonzaga, Inquirer Central Luzon

Read Next
US toxic waste dumped in Subic
EDITORS' PICK
Water remains our saving grace right now
Navotas will be on lockdown from July 16 to 29 – Tiangco
World-standard accounting: Unlocking your financial potential
Defend Your Health! Shop health essentials from home with Rose Pharmacy’s Online Sale
COVID-19 wards in 2 more hospitals reach full capacity
Chatting with companions, answering calls on MRT 3 trains banned
MOST READ
‘I am not my father,’ says daughter of lawmaker who voted to deny ABS-CBN franchise
In slap on face of PH, China replies to Locsin on tribunal ruling: It’s invalid
Vilma Santos-Recto ‘prepared’ to face ‘consequences’ over ABS-CBN franchise vote
Did a meme get on Agot Isidro’s nerves? She’s asking ’24 Oras’ to fact-check it
Don't miss out on the latest news and information.