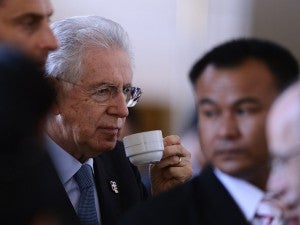 AM VIENTIANE, Laos – Italian Prime Minister Mario Monti is the latest head of government to offer help in ensuring the success of the Philippines’ peace process, as he and President Benigno Aquino III held talks on the second day of the 9th Asia Europe Meeting here on Tuesday.

Monti joined fellow European leaders in congratulating Mr. Aquino for the signing of the preliminarty framework agreement with the Moro Islamic Liberation Front, and said Italy was committed to fully support the process, and would pursue the implementation of a development project in rural communities in Mindanao.

The European Union, Norway, Switzerland and Japan earlier also lauded the President on the initial agreement and pledged to support it.

During his meeting with Aquino, Monti noted that the Philippines was a leader in rice productivity improvement as the home of the International Rice Research Institute. In line with this, he invited the country to participate in the Milan 2015 Expo which is focused on sustainable developmen, an aide to Mr. Aquino said.

The expo theme for 2015 is Feeding the Planet: Energy for Life and 100 countries are expected to participate.

Aquino told the Italian leader he would consider the invitation.

At the same time, Finance Secretary Cesar Purisima told Monti that the Philippines was open to working on Italy’s concerns on double taxation so that the country would be removed from Italy’s fiscal blacklist.