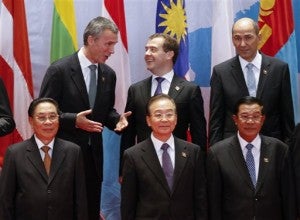 Secretary Herminio Coloma of the Presidential Communications Operations Office told reporters that the European leaders indicated their support for a peaceful resolution of the territorial conflicts based on international law, which is the same as the Philippine position.

But any meeting with China, which is claiming nearly all of the West Philippine Sea, is not on Mr. Aquino’s schedule, Coloma said.

Aside from the Philippines and China, Vietnam, Taiwan, Malaysia and Brunei also have claims to parts of the sea.

Mr. Aquino is also expected to mention the matter when he addresses the Asia-Europe summit and is likely to discuss the territorial dispute during bilateral talks with the leader of Japan on Tuesday, Coloma said. Japan also has simmering tensions with China due to conflicting claims to East China Sea islets.

“There was an agreement that it is a matter of international interest considering that a significant amount of world trade passes through that body of water. And in particular, Switzerland and the EU, and to some extent also Norway, indicated their firm support for the Philippines in terms of our position that conflicts or disputes in that area are to be resolved peacefully and follow international law,” Coloma said.

“And in particular, there is firm support for an Asean-centric approach, which has always been the position of President Aquino considering that four out of the 10-member states of Asean have specific stakes in the West Philippine Sea,” he added.

China has taken the position that territorial disputes should be settled bilaterally.

Coloma said the EU officials told Mr. Aquino that concerns about the Philippine aviation industry were technical and not political.

Philippine carriers have been banned from the European Union following the poor assessment by the International Civil Aviation Organization (ICAO) of the country’s aviation safety measures.

The Philippines was assured that it would get “every measure of support” in meeting international safety standards, he said.

“Definitely, the present restrictions on our Philippine carriers would not promote the idea of increased tourist traffic between Europe and the Philippines. And so we would like to see an early resolution of the concerns of the ICAO and similar bodies like the US Federal Aviation Administration,” Coloma said.