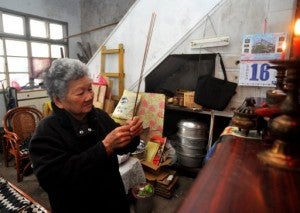 This picture taken on February 16, 2012, shows Lee Hua, 77, living alone in a shabby rented house in the Jinshan district of the New Taipei City. The number of foreign maids employed in Taiwan has more than doubled since 2000 as the island’s population ages rapidly, a labor affairs official said Sunday, Nov. 4, 2012. AP PHOTO

TAIPEI—The number of foreign maids employed in Taiwan has more than doubled since 2000 as the island’s population ages rapidly, a labor affairs official said Sunday.

Maids and nannies, mainly from Southeast Asia, working on Taiwan hit more than 200,800 in September, compared with 106,331 registered in December 2000, according to statistics compiled by the Council of Labor Affairs.

“The domestic demand for maids has been on the rise while Taiwan is gradually becoming an aging society,” Huang Chiu-kui of the Council told AFP.

People aged 65 and over account for 10.74 percent of the 23 million population, above the seven percent level at which a society is defined as “aging” by the World Health Organization, according to the interior ministry.

A record high 442,500 foreign workers were being employed in Taiwan as of September, largely from Indonesia, Vietnam, the Philippines and Thailand.