A ‘Bahay Pinoy’ in Vientiane 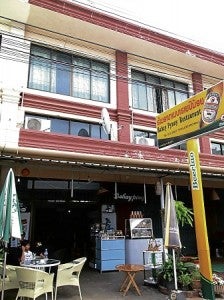 THE GUESTHOUSE in Laos is hosting more and more Filipinos who are visiting, working and doing business there.

VIENTIANE, Lao People’s Democratic Republic—If you are a Filipino worker from Thailand on a visa-run, chances are, you will go to the Royal Thai Embassy in Laos and stay at Bahay Pinoy Guest House and Restaurant in Rue Bourichane, about 15 meters from the embassy.

George, 48, a native of Tawi-Tawi is a civil engineer working with the Bangkok office of an international engineering company. He is married to a Laotian, Keutmy Phanphouvanna, with whom he has three children.

George has been in and out of the country since 1995 when his company sent him to open an infrastructure project in Savannakhet Province.  He is now a permanent resident in Laos.

Laos is a communist-socialist country. “I’ve seen the progress of Laos, from its closed-door policies until it opened up for business opportunities. Laos is still poor and largely depends on development aid, but it is now on its way to development,” George says.

“In 1995, Laos was very strict. Bibles, Koran and religious articles were prohibited. All your things were heavily scrutinized here,” he recalls.

After George and Keutmy got married in 1998, he decided to reside in Laos.

“There were already Filipinos here, but the bulk of Filipinos crossing the Thai-Lao border intensified when Thailand started hiring foreign teachers in early 2000s,” he says.

George and Keutmy’s first business was a rent-a-car venture starting with three utility vehicles. Guests of foreign embassies were his usual clients because cars were scarce then. His clients included Philippine delegations during important events.

In 2008, Bahay Pinoy a six-room guest house opened. Another Filipino guesthouse was called Kabayan but it closed last December.

“Even before we opened the guesthouse, Filipino expatriates often asked for my help in emergencies—like repatriation of bodies, aid for those who were ill, fund-raising, etc.,” he says. “Thus I realized I could help more of our kababayans if I had a guesthouse. At the same time we give jobs to Laotians.” 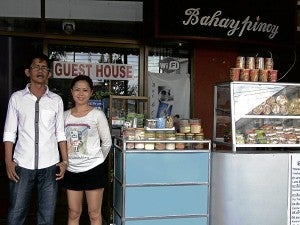 ASMAD “George” Hiya of Tawi-Tawi and his Laotian wife, Keutmy Phanphouvanna, set up the six-room Bahay Pinoy Guest House in 2008

At present, under the management of his wife, Bahay Pinoy  employs five staffers who can speak and understand a little Filipino.

Consul Cris Jaro gave him the idea to name the guesthouse Bahay Pinoy to communicate to Filipinos that “this is their home away from home.”

Commodities in Laos are expensive so many Filipinos and even other nationalities usually share one small room to cut costs. At Bahay Pinoy, George tries to make the room reasonably priced and at the same time large enough to accommodate more people in a room.

At their dining outlet, the menu is a combination of Filipino dishes like adobo, sinigang and tapsilog, as well as  Thai, Lao and American dishes.

“All processed foods are imported. They do not have processing plants. At least now they have a brewery, the Beer Lao. There is also a softdrink plant (Pepsi) and a cement factory. That is why everything is expensive here,” he explains.

The Filipino community in Laos is relatively small. About 600 are working in various companies and as development workers of  international non-governmental organizations (NGOs). The growing need for English teachers is also attracting Filipinos to Laos. In 1997, Laos joined the Association of Southeast Asian Nations. That same year, then President Fidel V. Ramos visited and a Philippine embassy opened.

Presently, the Philippine Ambassador to Laos is Maria Lumen B. Isleta.

The relationship between the Philippines and Laos is said to have started during the early years of the Vietnam War in 1955. From 1957 to 1964, Operation Brotherhood (OB), a project of the Jaycees International, sent 50 volunteer Filipino doctors, agriculturists, and nutritionists to Vietnam and Laos.

“I’ve met a doctor who was once a volunteer of OB. He married a Laotian and their children were raised here,” says George.

Laotians have a high regard for Filipinos. Filipinos are given discounted fares on the tuktuk (a vehicle similar to a tricycle) while other foreigners are charged higher, shares George.

“Although most of them no longer remember OB, many Laotians know that Filipinos somehow played a role in the rebuilding of their country. From businesses to government service, a Filipino is there,” George explains.

On the contributions of other countries, George says, “Americans bring in medical aid; Koreans and Chinese, business. The Japanese construct bridges and roads. Filipinos are mostly in education and social services.”

“Malakas ang loob natin. Being a Filipino is a gift,” ends George.

In spite of the difficulties and high cost of living, the Filipinos strive to carve a niche in Laos.