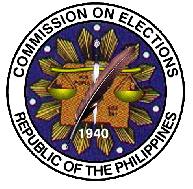 MANILA, Philippines—The Commission on Elections said it was hoping to learn a thing or two about the intricacies of campaign finance and contributions when it observes the US elections next week.

The Comelec chief said he instructed the two commissioners to gather and compare notes, not so much on the automated elections, but on how the US implements its campaign finance rules during elections.

Prior to the actual balloting, the observers have been invited to attend seminars tackling several issues on the elections.

“Two days before the election, there will be seminars so we can learn the processes especially on campaign finance,” Brillantes told reporters.

In the US, election campaigns can either be funded by private or public money or a combination of both.

But a system in the US presidential election also allows candidates to raise funds from private donors and at the same time receive from the government matching funds for a certain portion of donations made.

“Their campaign finance is complicated because they have matching funds which we do not have. We can learn something from that,” he added.

While the Philippines cannot exactly adopt such system, Brillantes stressed that Republic Act 9006, also known as the Fair Elections Act, which provides the rules on campaign finance and expenditures, should be amended.

He said there should be stricter limitations on campaign expenditures and the use of air time in the media. “The law should be amended so we can make adjustments in the system,” he said.

But in the absence of a more stringent law, Brillantes said, the Comelec will soon be issuing regulations before the campaign period, which begins three months before the May 13 elections.

“It’s about stricter implementation on campaign spending, limitation of advertisements, the use of radio time and Comelec time…. The regulations that we will come out with will be discussing a lot of things,” he said.

Earlier, the Comelec signed a memorandum of agreement with the Department of Interior and Local Government to strictly enforce campaign finance rules in next year’s elections.

Under the agreement, winning candidates for local elective positions from governor down to members of city councils, will have to present to the DILG a certification from the election body showing that they have already filed their statement of campaign contributions and expenditures before being sworn into office.

Winning candidates will be barred from assuming their posts without certification of compliance from the Comelec.