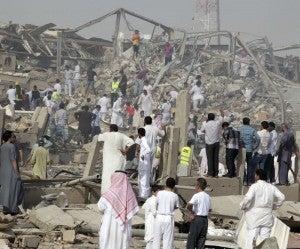 MANILA, Philippines—The Department of Foreign Affairs (DFA) on Friday identified the Filipino truck driver who was among the 23 people killed when a fuel lorry hit a bridge and exploded in the Saudi capital Riyadh, engulfing buildings and cars in flames.

At the same time, Foreign Affairs spokesman Raul Hernandez said that 10 other Filipinos were confined in four hospitals in Riyadh for various injuries, one of them in critical condition.

A total of 135 people, many of them Asians and other foreign workers, sustained injuries when the truck veered into a bridge pylon at a junction on Khurays Road in Riyadh at about 7:30 a.m. Thursday, causing a gas leak that spread out and then burst into flames, destroying nearby cars and a business.

The lone Filipino fatality, truck driver Florentino Santiago, was identified by his brother-in-law, who was his co-worker in a tractor company in Riyadh, Hernandez said in a text message.

“His remains are now in Riyadh Central Mortuary at Shumaisi Hospital,” he said.

Hernandez said the Philippine Embassy in Riyadh was making arrangements to repatriate Santiago’s remains and assist the victims.

Santiago’s wife Jocelyn Santiago told local radio interviews she had been informed her husband was sleeping in his truck parked about 200 meters only from the area where the explosion occurred when he was killed. He had been working in Saudi Arabia for five years.

Jocelyn said she could not believe her husband is dead since she just spoke to him past midnight Wednesday, just hours before the accident.

“He called me at around 12:30 a.m. and asked why was I still awake. I said I was cooking food to bring to the cemetery for the All Saints’ Day. He said he was already on duty, and told me to finish what I was doing and to go to sleep because it was already late,” she recounted.

“He also asked how our two children were and I said they were already sleeping. He told me to take good care of them because they are still very young,” Jocelyn added.

Jocelyn said Santiago left for Saudi Arabia last April and was planning to time his vacation with the high school graduation of their eldest child. They have two children—a 15-year old daughter and a four-year old son.

Civil defense spokesman in Riyadh, Mohammed al-Hammadi, said the explosion took place after gas leaked from the tank of the lorry, according to SPA state news agency.

“The explosion and fire happened after leaked gas filled the area. Huge damage happened, in addition to many traffic collisions,” he said, adding there were fatalities without specifying how many.

Hernandez said the injured Filipinos were in stable condition except for one who was reported to be in critical state and now under observation at the National Guard Hospital.

Philippine Ambassador to Saudi Arabia Ezzedin Tago said in a radio interview that the hospitalized Filipino workers are documented, and  therefore covered by medical insurance paid for by their employers.

“We are coordinating with their employers to ensure that they are well-assisted while they’re at the hospital. We will coordinate with employers in case there are issues,” he said.

Tago also said that authorities in the kingdom have confirmed that the tanker explosion was not a terrorist act.

In the Philippines, government officials extended support and condolences to the Santiago family.

Overseas Workers Welfare Administration (OWWA) chief Carmelita Dimzon visited Jocelyn and her family in Bulacan Friday. She said the family would receive the death benefits for Florentino, including P220,000 in scholarship and livelihood assistance.