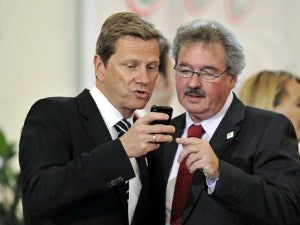 German Foreign Minister Guido Westerwelle (L) and deputy Prime Minister Jean Asselborn of Luxemborg (R) look at a mobile phone prior to the informal council meeting of European Foreign Ministers in Gododllo in the Grasssalkovich Royal Palace in this March 2011 file photo. AFP

BRUSSELS—The high cost of using smartphones and tablets across the European Union is set to be slashed under European Commission plans Wednesday to slash expensive roaming bills.

In a season that often sees disgruntled vacationers returning home to shock bills after calls and downloads in other EU nations, the European Commission announced a plan to extend price caps on roaming charges until 2016.

It would also act to narrow the cost between domestic calls and those made across borders.

From July 2012, receiving e-mails or Internet browsing will cost 90 cents a megabyte — 100 e-mails without attachments, an hour browsing, a minute of music dowloads — with the cost to fall to 50 cents in July 2014, against two to 12 euros today.

To increase competition between phone operators, new legislative proposals unveiled by telecoms commissioner Neelie Kroes will also offer Europeans the possibility from July 1, 2014, of buying a stand-alone roaming service from any provider while keeping their own number.

After being approved by the European parliament and the 27 member states, the plan will also enable mobile operators, including “virtual” operators without an own network, the right to use other operators’ networks in the EU.

“This proposal tackles the root cause of the problem — the lack of competition on roaming markets — by giving customers more choice and by giving alternative operators easier access to the roaming market,” Kroes said.

Currently, the EU has imposed maximum rates known as “Eurotariffs”, which came into force in 2007, first for voice calls but later extended to SMS and other services.

Until the stand-alone roaming service comes into effect, the system, initially due to be phased out in 2012, is to be extended until 2016.

Rates under that system will continue to be decreased.

Sending an SMS would cost 0.10 euros from next year instead of 0.11 today.