Filipino bishop named to Vatican council for dialog with other faiths 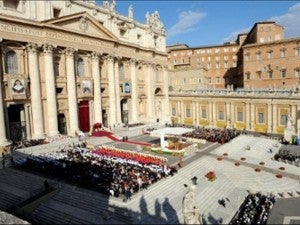 COTABATO CITY, Philippines—Pope Benedict XVI has appointed a Filipino bishop who has been working in the predominantly Muslim provinces of Sulu and Tawi-Tawi for 35 years to the Rome-based Pontifical Council for Inter-religious Dialogues (PICD), the bishop’s religious order announced here Tuesday.

In a statement, Fr. Jonathan Domingo, district superior of the Oblates of Mary Immaculate cited an announcement by the Vatican Information Service that Bishop Angelito Lampon, a member of the order, was named to the PCID on October 27.

The PCID is a special department of the Roman Curia formed by Pope Paul VI in 1964 for the promotion of understanding with other religions.

The council is headed by Cardinal Fernando Filoni, who was apostolic nuncio to the Philippines from Feb. 25, 2006 to June 9, 2007.

Lampon, who heads the Jolo vicariate, said his work in Muslim communities in Sulu and Tawi-Tawi since 1977 could be one reason why the Pope chose him to become member of the PCID.

“I’ve been working in an area where 97 percent of the population are [Muslim] Tausug, Badjao and Samal,” he said in an interview.

Lampon is currently the chairman of the Commission on Inter-religious Dialogue of the Catholic Bishops’ Conference of the Philippines (CBCP).

Other members of the PCID are bishops and prelature heads in conflict-affected Christian communities around the globe.

Domingo, the local OMI superior, said Lampon was not a stranger to inter-faith dialogues and understanding since this is what members of the congregation regularly do in their missionary work in places inhabited by non-Catholics.

The OMIs assigned in isolated and far-flung and island communities are involved in education, livelihood, parish work, and environment preservation, Domingo said.