No Filipino casualty in ‘Sandy’s’ sweep of Caribbean–envoy 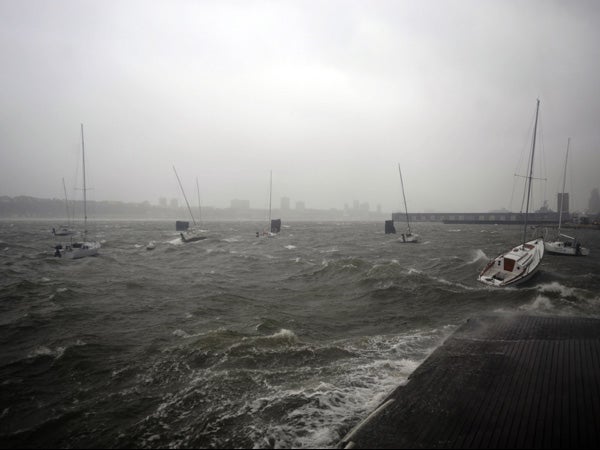 Sailboats rock in choppy water at a dock along the Hudson River Greenway during a storm, Monday, Oct. 29, 2012, in New York. Hurricane Sandy continued on its path Monday, forcing the shutdown of mass transit, schools and financial markets, sending coastal residents fleeing for higher ground, and threatening a dangerous mix of high winds and soaking rain. AP/Jeffrey Furticella

MANILA, Philippines — There were no reported Filipino casualties during the deadly sweep of Hurricane Sandy across the Caribbean that claimed as many as 65 lives last week, the Philippine embassy in Washington said Tuesday.

An emailed statement from the embassy noted that Philippine Ambassador to the US Jose Cuisia said that Filipino leaders in Bermuda, Cayman Islands, Grenada, Jaimaca, Haiti, Turks, and Caicos, the Bahamas, Trinidad, and Tobago informed the embassy that all their members were accounted for.

As Americans braced for Hurricane Sandy, the Carribean suffered from death and destruction with officials saying storm-related death toll has risen to 69 as of Tuesday.

It had been reported that Haiti accounted for 51 of the deaths, while other deaths had also been reported in Cuba, Jaimaica, Puerto Rico and the Bahamas.

Meanwhile, the embassy again urged Filipinos in the eastern seaboard of the US to heed warnings from authorities and stay out of the way of what is feared to be one of the most devastating storms to hit the country.

It said that Cuisia issued the new reminder shortly before Hurricane Sandy started wreaking havoc along a wide swathe of the East Coast that would affect more than 60 million people, including an estimated 460,000 Filipinos.

“Ondoy is nothing compared to the devastation that Hurricane Sandy is expected to unleash,” the envoy said, referring to the powerful typhoon that struck Manila in 2009 and which left more than 700 people dead and billions of pesos in damages.

“As the situation here in the East Coast would only get worse, I would like to underscore the urgent need for Filipinos, particularly in the New York and New Jersey areas, to stay indoors until US authorities declare that the danger posed by Hurricane Sandy is over,” the envoy said.

He said Filipinos should have stocked up on food and other provisions as authorities expect as many as 10 million people in more than 13 states to be affected by power outages that could last several days.

Cuisia said weather forecasters expected the superstorm, with its 90-mile per hour winds, to gain strength after making landfall near Cape May in New Jersey early. It is expected to trigger 11-foot-high storm surges that would result in massive flooding in New York and other coastal areas.

He said that while the Embassy and the Consulate General in New York suspended their operations, they were manned by essential staff who were placed on 24-hour standby to render assistance to affected Filipinos.