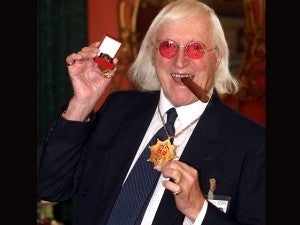 This is a March 25, 2008 file photo of Sir Jimmy Savile, who for decades was a fixture on British television. A year after he died, aged 84 and honored as Sir Jimmy, several women have come forward to claim he was also a sexual predator and serial abuser of underage girls. The child abuse scandal that has enveloped the BBC, one of Britain’s most respected news organizations, is now hitting one of America’s, as the incoming president of The New York Times is on the defensive about his final days as head of the BBC. Mark Thompson was in charge of the BBC in late 2011 when the broadcaster shelved what would have been a bombshell investigation alleging that the late Savile was a serial sex offender. AP

LONDON — The leader of England’s Catholics has asked the Vatican whether the papal knighthood given to disgraced British television star Jimmy Savile can be posthumously removed, a spokesman said Saturday.

Vincent Nichols, the Archbishop of Westminster, wrote a letter last week asking the relevant office to see whether Savile can be stripped of the honor.

Police investigating alleged child sex abuse by the late BBC star have identified around 300 possible victims, making him one of the worst offenders in British history.

The claims against Savile have plunged the BBC into crisis and destroyed the reputation of the man who, with his garish tracksuits and ever present cigar, was one of the most famous faces on British TV for decades.

In 1990, the DJ and presenter was made a knight commander of the Order of Saint Gregory the Great, by pope John Paul II.

Nichols’ letter asked the Vatican to investigate “whether the papal honor awarded to Jimmy Savile for his charitable works could be posthumously removed and its effects nullified, recognizing the deep distress of all those who have suffered abuse and the disquiet at Mr Savile’s name remaining on papal honours lists,” a spokeswoman said.

“While the outcome of the current police investigation is awaited, the allegations of abuse are deeply shocking and our thoughts go first to all those who have been abused.

“The Church invites all those who have suffered abuse to come forward to the appropriate authorities.”

Meanwhile Savile’s family broke their silence on Saturday to say their “own despair and sadness does not compare to that felt by the victims” of his abuse.

“How could the person we thought we knew and loved do such a thing?” said nephew Roger Foster, in a statement released to the Yorkshire Evening Post regional newspaper.

“Why would a man who raised so much money for charity, who gave so much of his own time and energy for others, risk it all doing indecent criminal acts? How could anyone live their life doing the ‘most good and most evil’ at the same time?”

The family said they removed the headstone from his grave — just weeks after it was erected — “so that it couldn’t become a focus for malicious people”.

They said their thoughts were with those who had suffered abuse.