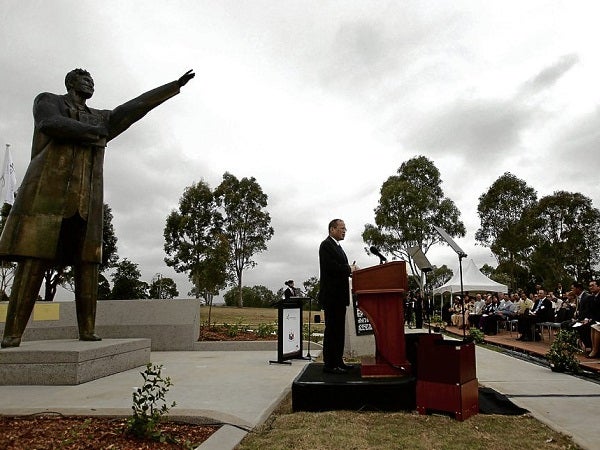 ‘POWERFUL SYMBOL OF NEW CHAPTER IN OLD FRIENDSHIP’ This is how President Aquino describes the Jose Rizal statue in the new Rizal Park in Rosewood near Sydney on Friday during the unveiling of the 5-meter bronze statue. It was made and donated by well-known sculptor Eduardo Castrillo. It’s the seventh Rizal landmark in Australia. Malacañang Photo Bureau

SYDNEY, Australia—There is a new Rizal Park and it is in Australia, serving to “light the way” for 220,000 Filipino migrants who have found refuge on a continent far away from home.

On Friday President Aquino unveiled a new statue of Dr. Jose Rizal in a quiet park in Campbelltown City, in suburban Sydney, named after the Philippine national hero.

Aquino unveiled the statue at the end of his three-day state visit to Australia, with New South Wales Premier Barry O’Farrell and Campbelltown Mayor Sue Dobson in attendance.

The brief and simple ceremony capped close to five years of fundraising by Filipino migrants here for the statue, which cost at least US$36,995.

The statue was donated by renowned Filipino sculptor

Enrique “Iking” Reyes, great-grandson of Rizal’s sister, Saturnina Realonda Rizal, and his family were present during the unveiling of the statue.

A briefer provided by Ambassador Belen Anota to journalists explained Castrillo’s concept for the statue, which stands 5 meters tall, or 7 m including the pedestal.

Eye of the storm

The statue shows Rizal in a typical European suit, with his his left hand raised instead of resting on his side.

Castrillo said this showed Rizal’s “readiness [for] the approaching storm,” referring to the “storm of revolutionary protest against colonial tyranny that resulted in Rizal’s own personal storm.”

“The most common character trait shared by heroes is that they are brave who dare enter the eye of the storm. Dr. Jose Rizal achieved significant literary and scientific recognition in the European community—which at that time was the center of power,” Castrillo said.

“In spite of this, he decided to come back to the Philippines where danger awaited him,” he said.

The statue is the latest addition to Rizal landmarks in Australia, which already has five in New South Wales state and one in Victoria state.

In brief remarks, O’Farrel said he saw “some similarities” in Aquino’s agenda of change and Rizal’s peaceful but powerful movement to unshackle Filipinos from the abusive and tyrannical rule of the Spanish colonial government.

“Similarities about two men driven by social issues facing their countrymen; two men who determined through peaceful means to deliver change to their country; two men who understood the power of words,” O’Farrell said.

The premier then quoted from Rizal’s “Mi Ultimo Adios,” saying that “we both dreamt to see that gem of the sea of the Orient; the dark eyes dry, smooth brow held to a high plane; without frown, without wrinkles and of shame without stain.’”

Aquino described the statue as “a powerful symbol of this new chapter in an old friendship.”

“At the core of today’s event is the spirit displayed by the Rizal Park Movement of Campbelltown with the support of various groups as well as associations and individuals here in Australia and in the Philippines … to translate this park’s 2008 master plan into reality,” he said.

“Rizal’s life and his eventual martyrdom served as the light,  the ultimate symbol that pulled our people together and inspired us to right an oppressive system toward eventual freedom from colonial rule,” Aquino said.

“His sacrifice embodied the power of one, a power that eliminated an entire race, strengthened our forefathers’ belief that so long as every Filipino was unwavering in his or her sense of self-worth, hope of better times ahead would not only endure but more importantly it would come to be realized,” he said.

Aquino recalled that Rizal, writing from London on Feb. 22, 1889, gave advice to the women of Malolos, in Bulacan province, on the requirements of good citizenship.

“In his letter he said, ‘an example is the father who gave each of his sons a lamp to light his way in the darkness. Let them intensify its flame, take care of it, not extinguish it to depend on the light of others but to help one another, seek each other’s counsel in search of the way,’” the President said.

“This monument in this park pays homage to his ideals and will be an enduring pledge that those ideals will continue to guide us and that Australians will be there as true friends in our collective quest for even better lives for our peoples,” he said.