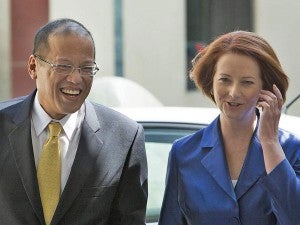 DOWN UNDER President Aquino is welcomed by Australia Prime Minister Julia Gillard at Parliament House in Canberra on Wednesday. AFP

CANBERRA, Australia (via PLDT)—The Australian government headed by Prime Minister Julia Gillard on Wednesday joined the Philippines and New Zealand in seeking the adoption of a joint code of conduct for the West Philippine Sea (South China Sea) to prevent rival territorial claims in the area from leading to armed confrontations.

Australian officials said they wanted stability in the West Philippine Sea, where the Philippines, Vietnam, Brunei, Malaysia and Taiwan dispute territories with China.

During a bilateral meeting with Mr. Aquino on Tuesday in Wellington, New Zealand Prime Minister John Key voiced the same position, emphasizing that his country had always favored peace efforts to settle disputes between nations.

“Obviously peace and stability in the South China Sea is critical because Asia is the fastest growing partner of the world and we want to see their growth [there],” Key told reporters at a briefing.

Summarizing the position of Australia, Anota said Australia would not take sides in the territorial issue between Manila and Beijing.

But she said Australia supported “the idea of freedom of navigation in the West Philippine Sea or South China Sea,” frowned upon the use of force or threat of force to solve the problem and was looking for solution that “must be rules-based, including the United Nations Convention on the Law of the Sea.”

“Both sides, of course, want to see an early conclusion of the code of conduct,” Anota said.

The Philippines and Vietnam have been pushing for the adoption of a code of conduct in the West Philippine Sea through the Association of Southeast Asian Nations (Asean).

The United States supports the Philippines and Vietnam in pressing for a code of conduct to maintain stability and freedom of navigation in the West Philippine Sea, home to sea-lanes where half of global cargo moves and where islands, reefs and atolls are believed to be sitting on vast deposits of oil and gas.

Without a code of conduct, any of the claimants could not explore resources in the disputed waters.

Anota said the code of conduct was not a solely Philippine initiative.

“We do contribute to the principles that are involved in the code of conduct,” she said. “But Australia strongly supports Asean’s view, which includes the Philippines, of course, that the code of conduct be concluded as soon as possible.”

Anota said the code of conduct was discussed at both the bilateral and the expanded bilateral meetings.

“Both leaders hoped the agreement would provide a basis for genuine, lasting peace in Mindanao. They agreed that it would now be important for the agreement to be fully implemented, resulting in significant improvements in the security and prosperity of communities across the southern Philippines,” the statement said.

Australian Minister of Foreign Affairs Bob Carr enunciated the position of the Gillard government, telling an expanded bilateral that the framework agreement was a “role model” for ending secessionist struggles in the region, according to Communications Secretary Ricky Carandang.

Carandang and Anota joined the expanded bilateral meeting, where select members of the cabinets of both the Philippines and Australia had a wide-ranging discussion of issues of mutual concerns such as defense, maritime security, trade, tourism and sociocultural affairs.

“Absolutely, it was discussed and they were very excited that the Philippine government could reach such a major step in forging something that could be a comprehensive, lasting peace,” Carandang told reporters.

Referring to the numerous developmental and aid projects of Australia, half of which are found in Mindanao, Carandang said:

“One of the reasons why they had put so much money into that area is they want to see this conflict resolved, so they were really all praise for our efforts to achieve peace, particularly the framework agreement, and they’re very supportive of the framework agreement and the work that has to be done,” Carandang said.

Australia did not promise new projects or set “new amounts” for aid flowing into war-torn provinces in Mindanao.

“But they have a number of projects are continuing. They seemed very happy with the pace of the projects they are funding,” said Carandang.

Carandang said the accord was a “big issue” for Australia and other regional allies, and for which the Philippines was receiving praises all over the world.

In response to Gillard, the President admitted that much work had to be done in the implementation stage of the framework agreement, Anota said.

The Bangsamoro accord, the  proposal to further increase agricultural and diversified high-end exports to Australia, the ratification of the Status of Visiting Forces Agreement (Sovfa) and the new mining policy under Executive Order No. 79, among other things, were also discussed by both sides.

This was followed by the signing of an air services agreement with Australia, which is a revision of the existing accord.

The details of the new air services agreement have not been made public.

Australian officials also thanked the Philippines for the ratification of the Sovfa, but this was discussed in general terms because details of the joint exercises and training of troops are still currently being ironed out in Manila between officials of both countries, Anota said.

The Philippines also pushed for increasing the volume of agricultural and diversified high-end exports to Australia.

“This will be welcomed equally by Australian consumers and mango growers in the Philippines,” it said.

President Aquino’s official visit to Australia began Wednesday with a ceremonial welcome before noon at the Government House, where he was accorded a 21-gun salute as he shook hands with the Governor General of the Commonwealth of Australia, Quentin Bryce, and her husband, Michael Bryce.

Australian protocol officers here said that this was the first time a visiting head of state was accorded a ceremonial welcome right on the lawn of Government House, which serves as the office of the governor general who is the official representative of Queen Elizabeth II.

The queen is the head of state of Australia, as Australia is a member of the British Commonwealth.

The governor general hosted a state luncheon in honor of Mr. Aquino at the dining room of the Government House, three hours ahead of the President’s meeting with Gillard at the Parliament House.

Mr. Aquino then laid a wreath at the Australian War Memorial and toured select war galleries before sitting down for an interview with an Australian TV journalist.

A state dinner hosted by Gillard in his honor ended the day’s official engagement, but the President had to leave early because he said he was not feeling well.

He said this was the case of “the spirit is willing, but the flesh is weak.”

He and Gillard left after delivering their respective speeches, leaving the guests to partake of a three-course meal.