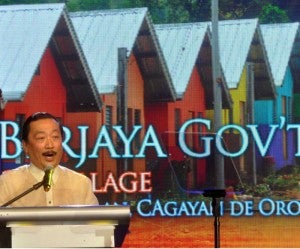 The local unit of the Malaysian conglomerate Berjaya turned over 150 houses to victims of tropical storm ‘‘Sendong” on Friday in a new community in Cagayan de Oro now officially known as Berjaya Village.

Fifty other houses donated by Berjaya Philippines were built in another part of the city. The 200 donated houses were built by Gawad Kalinga on land given by the city government.

The units, 22 square meters in size built on 35 square meters of land, were given away completely for free, Berjaya Philippines said in a press statement.

Roads to Berjaya Village are now being cemented through the help of Rep. Rufus Rodriguez.  Mayor Vicente Emano said piped water will follow shortly. The village already has electricity with the posts donated by Meralco Foundation.

Earlier this month, Berjaya, through its founder Tan Sri Dato Seri Vincent Tan, donated P300 million to be allocated for the next three years to build houses for the poor and the deserving through Gawad Kalinga.

Since its Philippine operations are expanding, Berjaya will keep giving back, said Paul Soo, Berjaya country manager. Berjaya operates the Luzon lotto, the Papa Johns pizza chain, a hotel in Makati, and by next year the Mazda distributorship here.

The turnover of the houses is the fulfillment of Berjaya’s commitment to help the victims of last year’s disaster and be part of the rebuilding process by ‘‘giving them a new beginning and hope,” it said.

Sendong killed over 1,000 people in Mindanao, most of them in Cagayan de Oro, and destroyed and damaged thousands of houses in several regions in the south. It was the deadliest storm in the country in over a decade.

‘‘Housing is a basic need that should be guaranteed to everyone,” Tan Sri Vincent Tan said earlier this month as he turned over to GK chair Tony Meloto a check for P100 millon, the first tranche of Berjaya’s P300-million donation.

‘‘We will tell everyone that the Philippines is open for business,” he said.