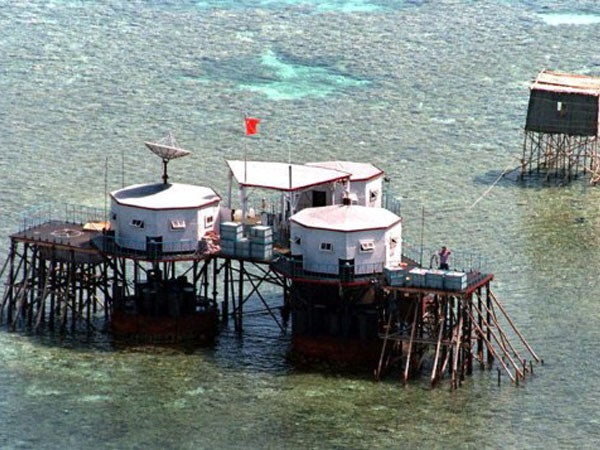 This 1995 file photo shows the Chinese national flag flying above octagonal structures built on stilts in the Manila-claimed Mischief Reef in the disputed Spratly Islands in the West Philippine Sea. AFP

MANILA, Philippines—Philippine officials have banned a senior Chinese diplomat from meetings for alleged rude behavior, in the latest fallout from a feud over the potentially oil-rich Spratly Islands, officials said Tuesday.

A memorandum from the department’s Asian and Pacific Affairs office said Li exhibited “conduct unbecoming of a diplomat” and that the embassy had been informed he would not be allowed to attend future meetings at the office.

Foreign Affairs Secretary Albert del Rosario has been informed about the incident, according to the memo, which was seen by The Associated Press.

The memorandum did not provide details of what happened at the meeting, but at least three senior Filipino diplomats said Li raised his voice in an offensive manner during a discussion of Manila’s claims that Chinese forces intruded into Philippine territorial waters in and near the Spratlys. The diplomats spoke on condition of anonymity because they lacked authority to talk to reporters.

The Chinese Embassy did not immediately respond to requests for comment.

The Spratlys, a chain of barren, largely uninhabited islands, reefs and banks in the West Philippine Sea (South China Sea), are claimed in entirety by China, Taiwan and Vietnam and in part by the Philippines, Malaysia and Brunei. They are believed to be rich in oil and natural gas and straddle busy sea lanes.

The Philippines has accused Chinese vessels of intruding at least nine times into Philippine waters in recent months, while Vietnam says Chinese vessels have hindered its oil exploration surveys in an area 200 nautical miles (370 kilometers) off its central coast that it claims as its economic exclusive zone.

China says it has sovereign rights over the entire West Philippine Sea. The reported intrusions have set off anti-China protests.

About a dozen protesters burned two Chinese flags near the US Embassy on Monday. In Vietnam, dozens of people held protests for a fifth straight week in Hanoi on Sunday, waving Vietnamese flags and chanting anti-Chinese slogans.

In the latest reported foreign intrusion into Philippine-claimed waters, an unidentified fighter plane buzzed just 20 feet (six meters) over the tip of an antenna on a boat carrying Filipino fishermen at Dalagang Bukid Shoal near the Spratlys, Defense Secretary Voltaire Gazmin said Tuesday.

The fishermen, shaken but unharmed by the June 4 incident, immediately left the area, about 130 miles (210 kilometers) off Palawan province’s Balabac Island. The fishermen failed to identify the aircraft, Gazmin said.

On February 25, a Chinese naval vessel allegedly fired to scare away Filipino fishermen from Jackson Atoll, also near the Spratlys. Chinese Ambassador to Manila Liu Jianchao denied that Chinese forces fired at the Filipino fishermen.