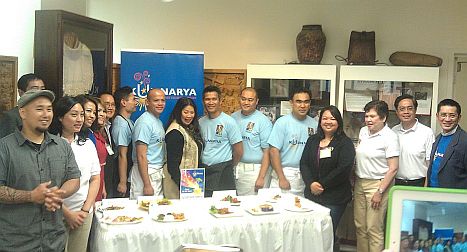 SAN FRANCISCO, California- Fusion and traditional Filipino food were dished out at the 3rd Kulinarya Showdown held recently at the Social Hall of the Philippine Center in downtown San Francisco. And the winning entries were Chicken Afritada, Sisig, Escabeche, and Kare-Kare not only great tasting but were feasts for the eyes. They were presented not the usual simply-put-together Pinoy fare but one that can attract a non-Filipino with the ingenious use of everyday bright colored leaves, tubers and what not. Tightly kept secret family heirloom recipes were pitted against studied and time tested recipes by outstanding chefs. Other recipes were simply prepared as their children’s taste buds like it.  Four winners moved on to the final round after their morning long cookfest.

Joycelyn Vergara, a mother of two and a group billing coordinator at the Westin St. Francis Hotel, along with Justin Hulog, a food blogger and a student at the San Francisco State University currently completing his MFA in creative Writing, bested the other contestants in the Amateur Division. It was Julog’s Sisig, and Vergara’s Kare-Kare that moved them forward to the finals.

Jerrick Figueroa, a graduate of the California Culinary Academy and currently a chef at the Plant Café and Cat Cora, and Thomas Weibull, Executive Chef at the Clift Hotel in San Francisco were the winners in the Professional Division. Figueroa, with his fusion style Escabeche, and Weibull with his delicious and healthy-dish, Chicken Afritada. The winning “simple” afritada was a product of long culinary experience. Weibull, a European-Filipino, has worked in numerous San Francisco restaurants. He was Executive Soul Chef for Rubicon and Plouf before he was promplty promoted to Executive Chef shortly after, earning it three-star and Top 100 Restaurant billing three years in a row. He opened Les Amis in 2005, and in 2007, received Three Forks from the Michelin Guide.

Filipino culinary specialists who participated in the Semi-Final round but did not place include Rennel Atienza and Edna Murray, in the Amateur Division; and Julsunthie Calalo, Larry Lontoc, and RJ Quiambao, in the Professional Division.

The championship round scheduled for December will pit the San Francisco division finalists and one other competitor per division from Southern California Kulinarya who held their own competition this year.

Winner of the Professional Division will receive $1000 in cash, a round-trip ticket to the Philippines via Philippine Airlines with two nights’ stay at a deluxe hotel in Metro Manila; a Kulinarya tour to selected culinary destinations in the Philippines, and an all-expenses paid trip to the annual EAT Vancouver World Culinary Travel Expo with the Philippine Department of Tourism, where he will have an opportunity to showcase Philippine culinary delicacies before an international audience.

The Amateur Division winner will receive $500 in cash; a round-trip ticket to the Philippines via Philippine Airlines and two nights’ stay at a deluxe hotel in Metro Manilaa ,and a Kulinarya tour to selected culinary destinations in the Philippines.

Now on its 3rd year, the Filipino cook fest invites professional chefs and novices alike. The annual Filipino Culinary Showdown is held to elevate the consciousness and appreciation of Philippine cuisine, further improve the quality of taste and presentation of Philippine dishes, and, most importantly, highlight the culinary skill and talent of Filipino-American culinary hobbyists and specialists in the Bay Area and the Northern American Region. It is organized by the Philippine Consulate General in San Francisco together with its attached agencies, the Department of Tourism, the Department of Trade and Industry, the Philippine National Police, and the Philippine Center Management Board and supported by Filipino American Arts Expositions (FAAE) and community leaders in the Bay Area. For more information on the upcoming Kulinarya Finals in December and learn more about the rich and colorful history and heritage of Philippine Cuisine, log on to www.itsmorefuninthephilippines.us.com