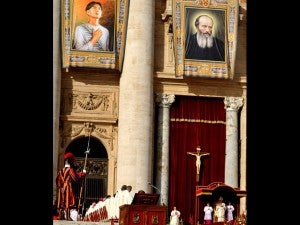 VATICAN CITY—Pope Benedict XVI canonized the Philippines’ second saint on Sunday, giving one of the Church’s top honors to the 17th-century teen martyr Pedro Calungsod before throngs of Filipinos in St. Peter’s Square.

Cheers went up in the crowd when Benedict declared Calungsod a saint and worthy of veneration by the entire Catholic Church. Benedict named six other saints Sunday, some of them missionaries like the devout boy from central Cebu province. They were Jacques Berthieu, a Jesuit missionary in Madagascar who was martyred; Giovanni Battista Piamarta, founder of the Congregation of the Holy Family of Nazareth; Maria Carmen Salles, foundress of the Missionary Sisters of the Immaculate Conception; Marianne Cope, Sister of Saint Francis of Syracuse; Kateri Tekakwitha, companion of the Jesuit missionaries in North America; and Anne Schaeffer, a German laywoman and mystic.

Many Filipino faithful are particularly devoted to Calungsod, who as a teenager went with some Spanish Jesuit missionaries to Guam in 1668 to convert the Chamorros natives. He was killed when the natives resisted.

“May the example and courageous witness of Pedro Calungsod inspire the dear people of the Philippines to announce the kingdom bravely and to win souls for God!” Benedict said in his homily.

Rome’s Filipino expat community came out in droves for the canonization, including Marianna Dieza, a 39-year-old housekeeper who said it was a day of pride for all Filipinos.

“We feel very happy and proud,” Dieza said. “We are especially proud because he is so young.” 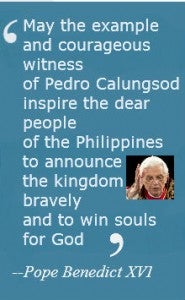 Thousands of Filipinos at home celebrated Calungsod’s sainthood with Masses, processions, stage plays, religious shows and the launching of postal stamps bearing his image and a map of his journey as a young Catholic missionary to the Pacific islands, where he was killed while spreading his faith.

“This is a day of great spiritual joy and national pride,” Philippine President Benigno Aquino III’s spokeswoman, Abigail Valte said. “We join the Catholic world on this day of solemn commemoration and celebration.”

Celebrations across the Philippines were centered in Manila, the capital, and in Cebu’s town of Ginatilan. Large screens were installed in church compounds to allow Filipinos to watch Calungsod’s canonization at the Vatican. Calungsod’s portraits were displayed in churches and many bought and carried his statues.

Philippine TV networks ran documentaries about Calungsod’s life and sainthood, and the country’s leading newspapers ran stories of his canonization, portraying him as a model for young Filipinos.

Details of Calungsod’s life are scarce, but according to legend, when he and the mission superior, the Rev. Diego Luis de San Vitores, tried to baptize a baby in 1672, the child’s father angrily refused and, with the help of other natives, began throwing spears at them both.

They were both killed and their bodies thrown into the ocean.

Many Filipinos living in Rome attended Sunday’s canonization, which also drew the faithful from nearby Malta.

“He was just a teenager, he is just a boy and he defended the Catholic faith,” Filipino pilgrim Jennifer Icao-Calleja said last week. “It is very important to the youth that at least we have to maintain our faith to God.”

The first Filipino saint was St. Lorenzo Ruiz of Manila, who was canonized in 1987.