FILIPINOS in Hawaii have built an impressive community center, where a monument of Philippine national hero Jose Rizal also stands.

Whether settled on Oahu, Maui, Hawaii, Kauai, Molokai or Lanai, our Hawaiian kababayan have retained the character of “rurban” Philippines—not quite rural, not quite urban.

Having been privileged to live among them, a party to their social gatherings and, recently, an eyewitness at  their fundraising activities and association meetings, one never ceases to be amazed at their fidelity to Filipino values, customs and traditions.

As one observer wryly put it:  “There seems to be a time warp somewhere, a ’50s look and feel in their endeavors!”

While some cynics  might call our Hawaiian diaspora’s tenacity coupled with resilience as “coping mechanism,” one sees this phenomenon as an excellent fusion of the Spirit of Aloha and the Spirit of Bayanihan. This is what makes them unique and amazing. 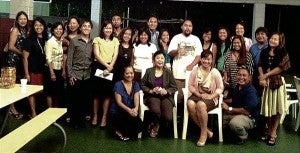 THE AUTHOR (center, front) with Ms. Kit Zulueta, Hawaii awardee of the Filipino-American Youth Leadership Program (FAYLP) and other members during the 3rd Youth Forum on August 30 in Honolulu.

Barely had I rested my aching bones after a straight flight from Manila to Honolulu,  when I found myself at the Filipino Community Center (FilComCen) in Waipahu briefing via teleconference  the multi-island board members of the United Filipino Community Council (UFCC). The UFCC is spearheaded by Jenny A. Quezon, the daughter of Marcos-era Consul General Trinidad Alconcel, who nevertheless made no bones about pushing $150 tickets for their next fundraising event.

For the love of kababayan

This was immediately followed by the monthly meeting of its 30-plus  association-strong unit chapter, the Oahu Filipino Community Council (OFCC) chaired by Jean Jeremiah, a veteran staffer of the state legislature and the Small Business Administration. With a determined voice, she called upon each OFCC association to report out their respective commitments for scholarships, calamity relief assistance, hometown donations via more expensive tickets to this or that dinner or ball at some plush hotel. One by one they stood up: the Annak ti Sinait iti Hawaii, the Bulacan Circle of Hawaii, the Fil-American Citizens’ League of Hawaii, the Primary Care Providers of Hawaii, and many others—a list too lengthy to rattle off but with a most meaningful and common purpose: ethnic bonding and civic work for the benefit of their kababayan left behind.

The FilComCen’s new president, Rose Cruz Churma, originally  from Baguio and Zambales,  was no less a busybody. Over halo-halo at the Golden Coin, a popular Pinoy restaurant in the Waipahu area, she gave me a quick rundown of her ambitious six-point work plan. True to the FilComCen vision and mission to  “promote and perpetuate  Filipino culture and customs in the state of Hawaii,” she enthusiastically explained the line-up: the Kinabukasan financial planning series; entrepreneurship trainings; computer literacy for senior citizens;  health and wellness programs focusing on traditional vegetables, including  saluyot, malunggay and ampalaya. There were also programs for environmental awareness through recycling materials into arts and craft products; innovative cultural festivities to update the community on the latest styles in fashion and design,  artistic and culinary adaptations with music, dance and game instruction for the young—all to be delivered with a Philippine touch. 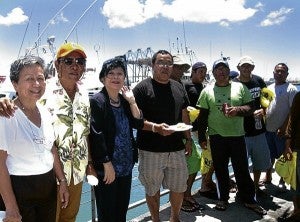 The impressive facility that is the FilComCen has been around since 2002, with an equally notable board of governors headed by Sen. Dan Inouye. Its current board of directors is headed by Edmund Aczon.

A recent meeting of Fil-Hawaiians mapped out the activities and assignments for the annual Filipino Fiesta on May 11, 2013, at the Kapiolani Park.  This will necessarily involves the entire Filipino community which does not want for government leaders, successful entrepreneurs, highly respected professionals, and socio-civic leaders.

Names dropped include the likes of an Eddie Flores, Isidro Alcantara, Roland Casamina, Jorge Camara,  Maria Etrata, and a lot more VIPs whose names and photos often grace the front, inside and back covers of glossy publications and print media like the Filipino Courier of publisher Mary Cordero, the  Filipino Chronicle of Charlie Sunido or the Fil-Am Observer of CJ Ancheta.

After a Korean-American lunch with Edna Alikpala and Melga Gendrano of the Filipino Women’s Civic Club, it was time to party and grace the annual Maria Clara Ball favored by the Pinay glitterati.  They came dressed to the nines in what were estimated in hushed tones to have cost $500 to $900 per ensemble. After much preening and sashaying to show-off their elegant costumes,  super PR woman Bennette Misalucha and popular  kpHI radio host Alan Alvarez  were the top choices for best in Filipiniana, after Honolulu Mayor Peter B. Carlisle gamely opted to get out of the Mr. Barong Tagalog competition lest he beat them all.

On to the serious discourse on the continued relevance of Jose Rizal to the overseas Filipino community, especially to successor generations growing up alienated from their forebears’ home country and culture, it was the turn of the Hawaii Knights of Rizal chapter led by Commander Raymond Liongson and Serafin Colmenares of the Congress of Visayan Organizations, to host their US-wide brotherhood during the equally grand gala night at the  Ala Moana Hotel where the Maria Clara  partygoers line-danced the previous night away.

As their guest speaker, I was able to update an appreciative audience on the Aquino government’s services and programs for the expansive Filipino diaspora.  One could not escape the evident chilling effects of recounting the challenges confronting the less fortunate migrant worker communities in conflict areas,  those victimized in multiform labor, sex and child trafficking situations and those who languish in jails or come home in coffins. Striking a parallel between them and  Jose Rizal as  fellow overseas Filipino was a refreshing twist. It allowed them to view their own migration as an opportunity to contribute to Philippine development like our national hero, but unlike him, to return and reintegrate alive, kicking and rich  in experience and expertise,  raring to share these back home. 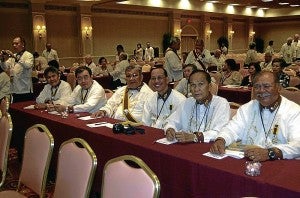 KNIGHTS OF RIZAL 4th USA Regional Assembly and Conference of the Order of the Knights of Rizal.

The visit to the Philippine Consulate was a revelation.  Newly designated Consul-General Julius Torres and his deputy, Paul Cortes (popularly acclaimed as the singing Pinoy diplomat with Broadway possibilities) made no excuses about the need for enhancement of the heritage house that has been the Philippines’ official Hawaii home  for decades.

The well-attended monthly Youth Forum at the consulate was  opportune for me to get them updated on issues and concerns affecting their counterparts in other countries.

I met Filipino  seafarers in Pier 38 to assuage their feelings of deprivation as they are usually not permitted to go on shore leave.

The president of the Filipino Association of University Women, Ethel Alikpala Ward, not only asked for pointers for their next Paskuhan celebrations but also made a last-minute bilin. Following the characteristically  Filipino practice of pakiusap,  she handed me an envelope with her dollar-denominated padala that I should deliver personally to Fr. Marisi Palepale, formerly the Hawaiian parish priest of the Kaneohe community and now happily servicing the poor of Bagong Silang in Caloocan City.

Never too far away

Our Hawaiian diaspora community is connected and wants to remain connected to the motherland. In spite of years of separation, it is clear that the “longing” remains.  Their hyperactive  leaders are in constant pursuit of each other to find better ways and means to perpetuate Filipino values, culture and tradition and, while doing so, bring joy to their respective  beneficiaries. It matters not if the sums to be remitted may seem  marginal after all the fun and fuss of organizing events are over—they do it all the time and with gusto.

In the last 20 years, records of the Commission on Filipinos Overseas (CFO) show that the Hawaii diaspora has coursed P38.5-million worth of donations through the CFO. This does not even capture their entire philanthropic activities oftentimes done low-key and channeled through nongovernmental organizations or directly to hometown beneficiaries.

The bayanihan spirit still prevails and permeates their lifestyle.   The now borderless Filipino nation thrives—Take it from our Hawaii diaspora.

[The Author is Executive Director of the Commission on Filipinos Overseas. She completed her Master’s in Asian Studies at the University of Hawaii under the East-West Center Exchange Visitor program. She is mother and grandmother to overseas Filipinos in Hawaii and New York,  with scores of relatives on the US mainland. She has just returned from an official visit to Honolulu.]