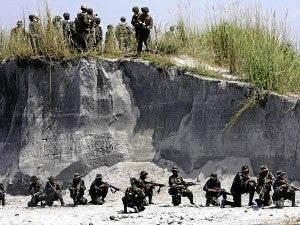 FILIPINO soldiers, along with American Marines, prepare for an assault during a live fire military exercise in Crow Valley, Tarlac. RAFFY LERMA

SUBIC BAY FREEPORT, Philippines—The 10-day military exercises between the Philippines and the United States ended on Thursday with high hopes that the two countries would respond better together during crisis.

“The Philippines-US Amphibious Landing Exercise (Phiblex) has become not only a venue for sharing our talents, but more for a development of a [highly efficient] training course for both nations’ military personnel,” said Maj. Gen. Rustico Guerrero, commandant of the Philippine Marine Corps.

He said the bonds of friendship between the two forces are important and “go beyond the professional development.”

In his speech during the exercise’s closing ceremony, Guerrero also referred to the peace agreement forged by the government with the Moro Islamic Liberation Front.

“This exercise has also provided our corps exploratory option in preparation for a shifting commitment in terms of security operations in territorial events,” he said.

“Peace beckons brightly in the horizon, particularly in the south,”  he said, noting that this situation would bring the Marines “back to our reason for being, as a national security force,” he said.

“[Phiblex] has allowed our corps much needed training… that would highly alleviate our maritime contingency ability,” he said.

“We can respond effectively to the entire range of military options when our nations are facing a crisis,” Timberlake said.

He said Phiblex 2013 is “arguably the most successful one to date.” The exercise, Guerrero said, was distinguished by the involvement of the Armed Forces of the Philippines’ major services. The exercises were held in various sites in Central Luzon and Palawan.

Brig. Gen. Remigio Valdez, Philippine exercise director, described Phiblex as “a challenging task, which was all worth it.”

“It has provided avenues for our participants to develop skills, proficiency and strategies to enhance our interoperability and capacity for mutual defense,” he said.

US Ambassador to the Philippines Harry Thomas Jr. said Phiblex was a another demonstration of the “great friendship and cooperation between our two nations.”

He described the Philippines as a “venerable ally,” and said the two countries’ partnership is “long-standing and a very important one.”

He said both the Philippines and the US “stand together [to make the Asia-Pacific region] grow secure and prosperous.” He said military exercises like Phiblex will enable both countries “to confront any and all challenges and to operate as one team.” Robert Gonzaga, Inquirer Central Luzon