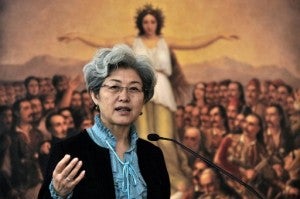 MANILA, Philippines — The Philippine government offered $200,000 to help Chinese victims affected by the recent earthquakes that struck two of its provinces, the Department of Foreign Affairs (DFA) said Friday.

On September 7, two major earthquakes measuring 5.6 and 5.7 magnitudes hit Yunnan and Guizhou provinces in southwestern China, causing the death of 80 and injuring more than 800 others.

Chinese state media Xinhua had reported that economic losses from the earthquakes were estimated at half a billion dollars.

The DFA noted that the donation was given during the courtesy call made by Chinese Vice Foreign Minister Fu Ying on Foreign Secretary Albert Del Rosario Friday.

The top Chinese diplomat was in Manila for the 18th Foreign Ministry consultations, where she was expected to discuss with Philippine officials ways to advance ties between the two nations.

In earlier text messages, Raul Hernandez, DFA spokesman, said that the unresolved territorial disputes over territories in the West Philippine Sea was one of several topics to be discussed.

“The FMC is a regular consultation meeting, discussions of which will cover all aspects of our bilateral relations as well as regional and multilateral issues of interest to both countries,” he said.