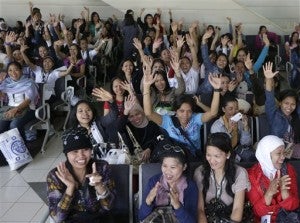 The women, mostly domestic workers, had been stranded at the Philippine Embassy in the Syrian capital Damascus for months after running away from their employers.

They had been unable to leave Syria because they did not have exit permits from their employers, having entered Syria as undocumented aliens.

Last month, Syrian President Bashar al-Assad ordered the requirements and fees waived so that all migrant workers sheltered by the embassy could depart.

The Switzerland-based International Organization for Migration chartered the Jordan Aviation flight that brought the migrants back to Manila.

Among the repatriated Filipinos was 24-year-old Normina (not her real name), a native of Cotabato City, whose right arm was in a cast. She said she was injured after she jumped off the top floor of her employers’ house in Damascus to escape maltreatment.

“They easily get angry and beat me up every mistake I make, no matter how slight. I thought maybe it’s because they were stressed out by the war,” she said.

Normina said fellow Filipinos took her to a hospital, then asked the Philippine Embassy to help her.

Normina said her employers lived in a Damascus neighborhood where they could hear gunfire and explosions every night.

“During daytime everything looks peaceful and normal, but you can see that the people are worried and there are food and money shortages. At night, you can’t sleep because of the sounds of war,” she said.

Merci, 26, from General Santos City, said she worked for three years as a maid in the city of Hama, north of Damascus, where the fighting was intense.

She said she and other Filipino maids planned their escape sometime in March, then decided to meet up at a local hospital, from where they called the embassy for help.

“The shelling was intense, you’re always afraid because your house might be the next one to be hit and get blown up,” she said.