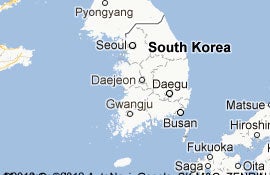 The boat overturned while carrying 15 crew members rescued from the 5,436-ton Malaysia-registered Shinline freighter near the southern island of Jeju, a coastguard spokesman said.

All the coastguard officers and 10 of the freighter’s crew were rescued unhurt by another coastguard vessel involved in the operation, but five perished in the incident, the spokesman said.

The freighter, with a total of 13 Chinese and six Philippine crew members, radioed for help after the ship — en route to Singapore — started taking on water.

“Of two coastguard boats involved in the operation, one overturned because of high waves,” the spokesman said, adding that the rescued sailors and coastguard officers were taken to a hospital in Jeju.

Three of the dead sailors were from the Philippines, and the two others from China, Yonhap news agency said, adding the freighter sank.

Yonhap quoted Jeju coastguard chief Cho Joon-Eo as saying: “The conditions were extremely bad and the freighter could have gone underwater at any moment. We had no other choice but to try to rescue as many sailors as we could.”