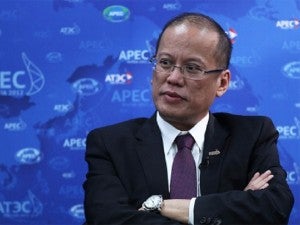 MANILA, Philippines–President Benigno Aquino III is set to leave for New Zealand and Australia next week for state visits to further bilateral ties with the two nations and updating foreign leaders on key Philippine developments, the Department of Foreign Affairs said Wednesday.

Aquino will visit New Zealand on Oct. 22 and 23 then proceed to Australia 24 to 26 for consecutive visits aimed at pursuing trade, defense and development relations with the two countries.

First on the President’s agenda in Auckland is a meeting with the Filipino community and a talk at a business forum organized by joint business councils of the Philippines and New Zealand. Aquino is also expected to hold one-on-one meetings with New Zealand firms.

There are some 36,000 Filipinos in New Zealand, accounting for around 1 percent of the country’s total population.

The President will then proceed to the capital Wellington to meet with Prime Minister John Key and Governor-General Sir Jerry Mateparae for discussions on issues of bilateral interest and updates on the GPH-MILF framework agreement.

In Canberra, Aquino will meet with Prime Minister Julia Gillard and Governor-General and discuss furthering political, economic and defense cooperation.

The President is also expected to take up the GPH-MILF framework agreement with the Australian officials.

Aquino will then visit Sydney for his business agenda: he will keynote the Philippines-Australia Business Forum, speak before the Asia Society of Australia and the Australia Philippine Business Council, hold a roundtable meet with CEOs of top Australian firms and later have one-on-one meetings with Australian companies.

Aquino will also lead the unveiling of a statue of Philippine national hero Dr. Jose Rizal in Campbelltown, a Sydney suburb.

While there, the President he will also meet with the Filipino community to “encourage them to help raise the profile of the Philippines” by serving as “knowledgeable and competent” sources of information about their home country.

The DFA said there are around 224,000 Filipino migrants in Australia, making for one of the largest migrant populations there.