‘A celebration between people comfy around each other’ 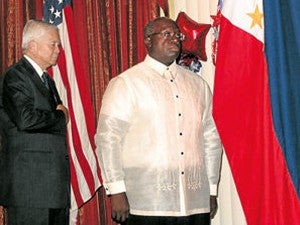 FROM SEA TO SHINING SEA Foreign Affairs Secretary Albert del Rosario and US Ambassador Harry Thomas Jr. stand at attention during the playing of the Philippine national anthem at the US Embassy to mark the American Independence Day and Philippine-American Friendship Day celebration. (See story on Page A3.) SUNSHINE LICHAUCO DE LEON/CONTRIBUTOR

In celebration of US Independence Day and Philippine-American Friendship Day on July 4, over 500 Filipinos and Americans gathered Friday evening at the US Embassy in Manila for a night of honoring the past and looking forward to an even better future.

Guests trickling in were welcomed in a receiving line with a handshake and warm smile by Ambassador Harry Thomas Jr. before continuing on to the ballroom where they could enjoy the live jazz band.

After the presentation of colors and the singing of the Philippine and American national anthems, Ambassador Thomas spoke about the importance of the celebration.

“This is a special day when we remember our history and our duty; our families, near and far; and our responsibilities as Americans at home and abroad. In other words, it’s a day when we reflect on what it truly means to be an American.”

Thomas stressed that friendship between peoples and nations was a cornerstone of being American: “We are a strong nation, but the core of our strength lies in our ability to make and build relationships. To make friends, not war. To project the power of our ideas, not the strength of our arms…”

He continued: “The most important contributions we have made to the world, we have achieved in cooperation with our friends and allies abroad.”

Special guest Philippine Foreign Affairs Secretary Albert del Rosario followed with his greeting in behalf of the Filipino people, emphasizing that the ideals of freedom and democracy were things the Filipinos also fought to defend.

“These are the same values that bind the Philippines and America in a strong alliance and strategic partnership,” Del Rosario said.

As one American guest described it, “The ambiance was relaxed, friendly, like a celebration between old friends, between people who are comfy around each other.”

Among those who came were Vice President Jejomar Binay, Cabinet members Cesar Purisima and Gregory Domingo, members of Congress, media personalities and businessmen like Lucio Tan and Aurelio Montinola III.

The more formal atmosphere inside the embassy provided the perfect complement to the relaxed scene in the garden, where guests could grab a hamburger and a beer while watching the fireworks display over Manila Bay.

Filipino-American businessman Rick Santos believes the number of people who came to show support was a good sign of things to come.

“Last night showed that Philippine-US relations are strong and there is a continuous bond and interest in the two countries, both economically as the Philippine economy picks up, and militarily as the Philippines becomes a strategic country within Asean in light of an emerging China.”