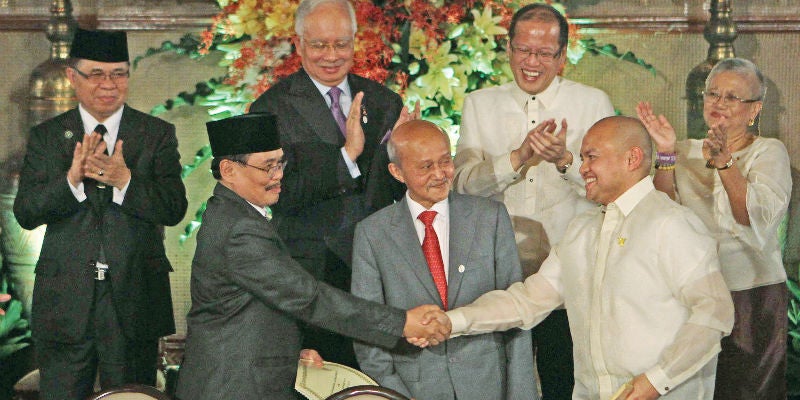 “On this day of hope and promise, we must not forget the challenges that remain. The ink on this paper will not save a single life unless it is matched with a true and immovable commitment to peace.”

“If tension arises it must be met with tolerance. All parties must stand by the principles on which this agreement rests: Respect for religion, nonviolence and human rights,” he said. “This is not an endpoint, but a beginning. There’s still much to be done.”

The leader of the country who  brokered the peace talks in Kuala Lumpur offered Malaysia’s assistance to make the agreement work.

“Today is a day of great hope. A day which sees the dawn of a new beginning for the people of Mindanao. A day when we welcome a unified Philippines,” Najib said before a crowd of diplomats, lawmakers and peace advocates at Rizal Hall in Malacañang.

“Out of the darkness comes a new light, albeit with an old name, Bangsamoro,” he added, referring to the autonomous Moro homeland that the framework agreement sought to create.

“This agreement exists because individuals were prepared to raise their eyes and look to a brighter future. Today we pay tribute to the quiet bravery of the negotiator,” Najib said.

The prime minister described the framework agreement as a “firm ground on which a lasting peace” could be built.

It would protect the rights of the Bangsamoro people, as well as preserve the sovereignty and territorial integrity of the Philippines, he said.

Najib said that it was Malaysia’s hope that the agreement would give the Muslims a “homeland” again. “For Mindanao, there can be no more lost generation,” he said.

While saying that the framework agreement was “historic,” he said it “doesn’t solve all the problems.”

“It sets the parameters in which a lasting peace may be found. I hope all sides continue to recognize their responsibilities in the coming months as they work toward a final peace agreement,” he said.

“This is a chance to restore dignity to the people of southern Philippines: Those deprived of humanity by decades of violence. A chance to ensure that the Bangsamoro people would enjoy the dividends of peace which they rightly deserve, and a chance for all sides to prove that peace and moderation are the hallmarks of all religions.”

In view of the immensity of the work that awaits both sides, Najib said Malaysia was ready to help as the Philippines’ partner of peace.

He said Malaysia was willing to offer training and education so the Bangsamoro children could aspire to a future that their parents could only dream of, build institutions and develop land so that former freedom fighters could reap the “harvest of peace.”

“To all the people of the Philippines, we will stand with you to make this agreement work,” he said.

“Today, something has changed. Today we turn our backs on violence, and turn instead toward a new and brighter future,” he said. “It’s my hope that this agreement brings about a new time of moderation.”

Najib said peace in Mindanao was within reach after four decades. “Let’s grasp with both hands and never let go.”

Mr. Aquino officially welcomed Najib to Malacañang ahead of the 1:30 p.m. signing of the Bangsamoro deal, which Najib and a host of foreign delegates witnessed.

Arrival honors, including a 21-gun salute and traditional music by Pangkat Kawayan, greeted the leader of Malaysia. After signing the guestbook, both leaders had a one-on-one meeting at the Music Room before an expanded bilateral meeting at the Aguinaldo State Dining Room.

The President also hosted a luncheon in honor of Najib and his spouse, Rosmah Mansor.

Both leaders agreed that the visit was a “significant milestone” in bilateral relations and “signals a new phase of deeper and more robust ties between the two countries,” said a joint statement issued by the Palace.

“The Malaysian government affirmed its support to the Philippine government’s sustained socioeconomic programs, which are designed to foster further economic opportunities and jobs in Mindanao,” the joint statement said.

“They also urged Malaysian and other foreign businessmen to consider investing in palm oil, natural rubber, the halal industry, infrastructure and other sectors in the region.” With reports from Michael Lim Ubac and AFP