Peace is within reach—Malaysian PM

They shook hands,  ushering in what Malaysian Prime Minister Najib Razak described as “a new beginning for the people of Mindanao.”

After four decades of conflict, “peace is within reach,” Najib said.

And the government and the Moro rebels, overcoming 40 years of hostilities, took their first step toward ending the insurgency in Mindanao that had cost the lives of more than 150,000 people and reduced the resource-rich island into the poorest region of the Philippines.

On hand to signify the Islamic world’s acceptance of the agreement was Ekmeleddin Ishanoglu, secretary general of the Organization of Islamic Cooperation (OIC), the world’s second largest intergovernmental organization after the United Nations.

President Aquino, in his keynote speech, said the agreement sealed “genuine, lasting peace in Mindanao,” which the government hoped to achieve before the end of his term in 2016.

Prime Minister Najib said the agreement would “protect the rights of the Bangsamoro people and preserve the sovereignty and territorial integrity of the Philippines.”

“We are men and leaders who want to make a difference and we have decided that the time has come for us to choose the moral high ground,” Najib said.

The agreement “does not solve all the problems, rather it sets the parameters in which peace can be found,” he said.

‘I come in peace’ 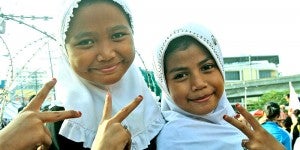 Murad, who spoke ahead of the President, pledged the MILF’s determination to silence the guns to allow peace and development to come to Mindanao after 40 years.

“I come in peace,” Murad said, admitting that it was his first time to set foot in Malacañang, the seat of power in the Philippines.

“We have inked the most important document in the chapter of our history—a landmark document that restores to our people their Bangsamoro identity and their homeland, their right to govern themselves, and the power to forge their destiny and future with [their own hands],” Murad said.

“Today we are here to celebrate the victory of the Bangsamoro people and the Filipino nation that is shared by the international community and the Muslim world, the victory earned not by war but by a collective desire to restore justice and peace to a troubled land,” he said.

Murad then extended “the hand of friendship and partnership to the President and the Filipino people as we join to embark on the historic journey to rebuild our home, institute justice and [end the] reign of violence and restore normalcy to the lives of the masses of our people in Mindanao and Sulu with the Framework Agreement on the Bangsamoro.”

The framework agreement, also called a road map to a final peace settlement that is expected by 2016, grants Muslims in Mindanao broad autonomy in exchange for ending their four-decade insurgency, which would bring peace and stability and eventually development to the region.

The 13-page document outlines general agreements on major issues, including the extent of power, revenues and territory granted for Bangsamoro, the new Muslim administrative region.

It calls for the establishment of a 15-member Transition Commission to draft a law creating Bangsamoro. The draft law will be submitted to Congress for adoption, then submitted to the people of Mindanao for approval in a plebiscite.

The agreement says Bangsamoro will replace the Autonomous Region in Muslim Mindanao (ARMM), which President Aquino described  as “failed experiment.”

The ARMM was created by a 1996 peace agreement the government signed with the Moro National Liberation Front (MNLF), but Mr. Aquino considered it a failure because it did not end the conflict, the rebels did not disarm and it did not improve the lives of Muslims.

Another preliminary accord was struck down by the Supreme Court in 2008 as unconstitutional because it would create a separate state.

Western governments have long worried over the presence of small numbers of al-Qaeda-linked militants from the Middle East and Southeast Asia seeking combat training and collaboration with the Filipino insurgents.

One of those extremist groups, the Abu Sayyaf, is not part of any negotiations, but the hope is that the peace agreement will isolate its militants and deny them sanctuary and logistical support they had previously received from rebel commanders.

Abu Misri Mammah, a spokesperson for Kato’s forces, on Sunday said that his group did not recognize the peace accord.

“That’s a surrender,” he said. “We won’t waver from our armed struggle and continue to aspire for a separate Muslim homeland that won’t be a creation of politicians.”

President Aquino acknowledged that much work remained to be done after the signing of the agreement.

“The devil is in the details,” he said, but added that the government is committed to peace and development in Mindanao.

“So many challenges await us, but the bridge of trust that spans this room is strong enough to withstand the trials ahead, however difficult they may be,” Deles said.

In his speech, Murad reminded everyone of the roots of the Moro rebellion.

“Never in my wildest dream since I was a child, or when I joined the Bangsamoro struggle more than 40 years ago, that one day I will see the interior of this building [Malacañang] that once housed the Spanish and American governors general, and now the Presidents of the Philippines,” Murad said.

“Today . . . we have stayed the course. Our perseverance has prevailed over those whose position is to perpetuate war and conflict in Mindanao and Sulu for personal aggrandizement,” he said.

Mr. Aquino said that many had resorted to “the path of vengeance and violence,” but he promised to dismantle the culture of impunity in the country.

“I myself lost my father to an oppressive system,” he said. “I myself thirsted for justice, and was deprived of it then by the dictatorship. I empathize with our Bangsamoro brothers and sisters, and can only vow to work as hard as I can to see that the culture of impunity is dismantled, and that the foundations of righteousness and cooperation are laid.”

And he gave a promise to the Muslims of Mindanao: “We will give our people what is truly due them: A chance to direct their lives toward advancement in a democratic, peaceful and safe society.” With reports from Nikko Dizon, AP and AFP