PH is 3rd most disaster-prone country in the world–report 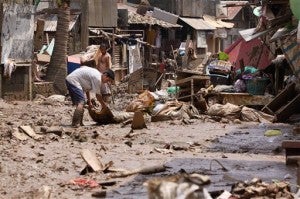 MANILA, Philippines–The Philippines is the third most disaster-prone country in the world mainly due to high exposure to natural calamities, a new international report showed.

The World Disaster Report 2012, released in Brussels on Oct. 11, also said the Philippines could spare up to 20 million of its people- roughly a fifth of the total population- from natural disasters through improving the protection of coral reefs, a primary line of defense against coastal hazards, particularly tsunamis.

Tropical and coastal nations led the list of countries at high risk for disasters, with Pacific countries Tonga and Vanuatu rated first and second, respectively.

Of the top three at risk, however, the Philippines had the best rating on adaptation measures, with scores similar to that of Malaysia and Thailand, countries farther down the overall risk rankings at 91st and 92nd place, respectively.

The Mediterranean archipelago of Malta and Middle Eastern country Qatar, meanwhile, are the two lowest-risk countries, according to the report.

“The top fifteen most at-risk nations are all tropical and coastal where coastal habitats like reefs and mangroves are incredibly important for people’s lives and livelihoods. Reefs, for example, can reduce wave energy approaching coasts by more than 85 percent,” The Conservancy said in a statement posted on its website.

“What is conspicuous is that among the 15 countries with the highest risk worldwide happen to be island states–including Vanuatu, Tonga and the Philippines at positions one to three. Owing to their proximity to the sea, island states are particularly exposed to the natural hazards of cyclones, flooding and sea level rise,” read the report.

The report, a collaboration among the United Nations University’s Institute for Environment and Human Security (UNU-EHS), the German Alliance for Development Works (Alliance), and US-based environment group The Nature Conservancy, rated the disaster risk of some 173 countries around the world using “globally available data” on their individual exposure and susceptibility to disasters and coping and adaptive capacities in the event of natural calamities.

“The index reveals global hotspots for disaster risk in Oceania, Southeast Asia, the southern Sahel and especially in Central America and the Caribbean. In these places, a very high threat of natural disasters and climate change meets very vulnerable communities,” Joern Birkmann, vulnerability researcher at the UNU-EHS, said in a statement.

“Very high exposure is a significant risk driver, although a high development level of society can counteract this substantially, as the example of the Netherlands shows… thanks to social, economic, ecological and institutional factors, the Netherlands has reduced its disaster risk enormously,” said the report.

The report said some 4,130 natural disasters were recorded nationwide from 2002 to 2011, leaving more than a million victims and an economic loss of roughly $1.195 trillion.

“So far, people have rarely been the direct trigger of such disasters. But with their devastating interventions in nature, they have massively raised the hazard potential. The destruction of mangrove forests and coral reefs, for example off the coasts of Southeast Asia, has reduced protection against tidal waves and flooding,” said the report.

“The clearcutting of mountain forests exacerbates soil erosion and thus, as in Pakistan, the extent of floods. Climate change and the more frequent occurrence of “climate extremes” are permanently aggravating the hazard situation and increasing vulnerability,” it added.

The top 15 countries with the highest risk are:

Read Next
Malaysia pledges investments in Philippines
EDITORS' PICK
Is your company a growth champion? Stand up and be recognized!
New Year, New Rediscoveries
More than 150 National Guard in Washington for Biden inauguration test positive for coronavirus
PNP’s Covid-19 cases jump to 9,809; 52 new infections logged
Pope Francis to miss events due to new flare up of leg pain—Vatican
Acer Philippines welcomes you to its first flagship store
MOST READ
Why Kris Aquino sleeps with her pearls
Parlade targets universities after fiasco with beauties
DND sees AFP gaffe in UP Red-tagging
Cavite gov’t weighs airport deal termination
Don't miss out on the latest news and information.