Believe in the power of your dreams 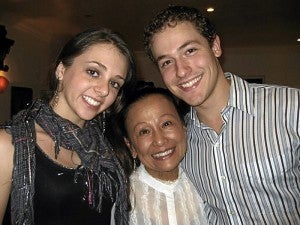 Maniya (center) brought two young protégés—Naomi Hergott and David Kiyak to play the lead roles in Romeo and Juliet, which will be staged in cooperation with Philippine Ballet Theater from July 7-10.

She left the country at 18— wide-eyed, insecure and frightened. “It’s the biggest sacrifice to leave a country you love, to leave your family,” says Maniya Barredo.

To patrons of the arts, the rest is history. Maniya Barredo scaled the heights of the international ballet stage, rising to prima ballerina.

“Everyday I am Filipino, proud in my soul of who we are. But the US gave me the many opportunities that made me what I could be… gave me the freedom to be the best that I could be,” she says. “It’s amazing to go to another culture with a supportive environment for the arts and receive respect as a foreign dancer. I was provided opportunities beyond my imagination!”

Retiring after 20 years with the Atlanta Ballet, Maniya now directs the Georgia-based Metropolitan Ballet Theatre, which trains dancers for professional work. And she is currently back in Manila to share her talents, skills and life lessons with Philippine Ballet Theater, a resident company of the Cultural Center of the Philippines, which  under her direction will perform the classic Romeo and Juliet at the CCP this week (July 7 at 8 pm, followed by evening shows on July 8, 9 (8 p.m. and a 3 p.m. matinee on July 10th.)

Maniya brought two young protégés—Naomi Hergott, 17, from Metropolitan Ballet Theater and David Kiyak, 21, from Orlando Ballet—to play the lead roles in Romeo and Juliet.  She also hopes to take some young Filipino dancers to train with her at Metropolitan Ballet Theatre. She has been returning to work on other productions as well, among them Giselle and Sleeping Beauty.

How she got her name

Born in Manila as Josephine Carmen Imutan Barredo, and nicknamed Honey, the story of how she was renamed “Maniya (after Manila)” tells of her early struggles.

“I had put on weight and Robert Joffrey (the director of her company), told me I should be a nurse or secretary like most Filipino women were.”  But Maniya was determined to prove him wrong and worked hard all year.  When she won a contract to work with another ballet company, she went to announce she was leaving. “Renaming me was his way of apologizing and enticing me to stay and dance for Joffrey Ballet. And I am a forgiving soul!” retells Maniya, who stayed but later accepted an invitation to join Les Grands Ballets Canadiens.

The rare distinction as Prima Ballerina was accorded to Maniya in 1978 by Dame Margot Fonteyn after she performed Giselle at the CCP before a VIP audience including then President and Mrs. Ferdinand Marcos. She has danced with Mikhail Barishnikov, and has been mentored by countless icons of the international ballet world.

“Life is not a dress rehearsal”, Maniya likes to say.  One day when Mikhail Baryshnikov was injured performing with Stars of the American Ballet, she received a 2 p.m. call to dance in his place. “I got there at 4, the performance was at 8.  It was Don Quixote.”  At the end when the red roses were being brought on stage for her, Mikhail grabbed them and presented the bouquet to her himself. “And he said thank you for saving my touché! It was in front of my home audience, Atlanta—so they were all screaming!”

Selected by Alicia Alonzo in 1976 to represent Canada in the International Ballet Festival in Cuba, Maniya received twenty curtain calls from the elite audience of dancers, teachers and critics.

Her mission: Give back

Maniya’s mission is to give back what she has learned from her truly amazing experiences, to those who do not have these opportunities 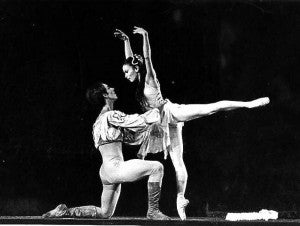 “I am so proud of and so believe in our innate talent.  If we ever invested in our talented youth to the extent other countries do,  what amazing artists we would be producing. But we are so behind.  We must cut red tape and facilitate. With the kind of talent we have—we should be in the forefront!”

“The biggest natural resource we have are our people, especially the endangered species—our artists!” says Maniya. “How many have been neglected by standing still!  I want to play that role—to jumpstart them! I want to teach, give new heart, impart life values, provide some perspectives,” says this passionate icon.

“Those blessings to me of so many mentors and opportunities, I want to impart in some way to the next generation of dancers and the public—so they too can dream and see the possibilities!”

Artistic and cultural exchange is important to nurture the artistry in all of us. “We’re living in a global world, we are all citizens of the world,” she says.

She imparts to her students lessons in how to enjoy the process of learning while moving towards their objectives. “Goals are there to motivate us, but it’s in the steps we take to get there that will get us there!”

Principal dancer Tiffany Mangulabnan, 18, like all her colleagues, is in awe of Maniya and her style of teaching. (Maniya) asks us to give everything straight from the heart, from our center, the young ballerina says.

And though she has reached the pinnacle of her own dreams as a dancer, now Maniya dreams  of establishing a private conservatory here, an academy with high levels of dance, music and theatre training together with excellent academics—all in one place.

She wants to hand-pick talented youth from ages 10 to 18 from different parts of the country and give them a chance to be trained as she was, and impart the lessons she has learned.

“Talented kids are brilliant so they must have the best academics and in such a setting and with good teachers, these young artists won’t feel different, and they’ll grow up confident.” Maniya envisions the need to later establish satellite schools.

Dare to be naked

“In art you must be true to the art form—never shortcut the technique of dance. At the same time I want to show my students that they can be naked, bare, and unafraid of showing their emotions.”

This mantra has certainly worked for Maniya who has earned numerous major awards and accolades from the Philippines, including the Gawad CCP Para Sining Award, Presidential Medal of Merit from President Fidel Ramos,  and from the United States and the international ballet community.

Maniya cautions that remaining humble when one has reached success is very important.  The talented professionals that became her mentors were down-to-earth and humble. “They took their art very seriously, but did not take themselves that seriously.”

“Be original and believe in the power of your dreams. Do what your heart, body, mind and soul say you should do. Never sell out no matter how hard the experience you may have to go through in life.”

Read Next
Why was the POEA license of Steadfast renewed?
EDITORS' PICK
A grand way to celebrate the holidays
Smart offers wireless fiber-like speeds to Filipino homes with country’s first 5G Prepaid Home WiFi
Holidays made best with Acer’s ‘Holidays at Home’ raffle promo
Gov’t fine-tunes alert level system
Corruption in PH: Where presidential aspirants stand
DOH checking if 3 COVID cases due to Omicron
MOST READ
Bong Go left PDP-Laban with presidential bid under PDDS — Pimentel
FDA warns against use of 5 imported beauty creams
Isko’s messaging takes a turn as he commends Duterte
Orthodox priest shouts ‘Pope, you are a heretic’ at Francis in Athens
Don't miss out on the latest news and information.