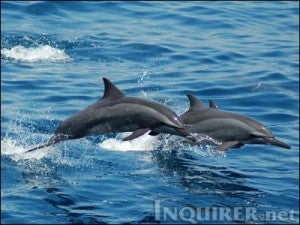 MANILA, Philippines—A Quezon City court on Friday barred the Department of Agriculture (DA) and the Bureau of Fisheries and Aquatic Resources (BFAR) from reexporting to Singapore 25 captive dolphins held at Ocean Adventure Park in Subic, Zambales.

The DA and BFAR, as well as the Singapore-based Resorts World in Sentosa, Singapore, were also ordered not to import any more dolphins into the Philippines while the temporary environment protection order (Tepo) was in effect.

“After a thorough review of the allegations in support of the prayer for the issuance of a Tepo, this court finds that there exists extreme urgency and that the subject 25 captive dolphins and the petitioners will suffer grave injustice and irreparable injury should the reexporting of the captive dolphins and the importing of additional dolphins into the country be undertaken at this time,” the two-page order read.

Fernandez issued the Tepo on Friday afternoon as Executive Judge Fernando Sagun was in Bacolod City on official business. Fernandez ordered the personal serving of the Tepo on the three respondents.

The petition filed by the Earth Island Institute (EII), Philippine Animal Welfare Society (PAWS), and Compassion and Responsibility to Animals Welfare Philippines et al. will be heard by RTC Branch 101.

Fernandez said this branch was the “only designated environment court” in Quezon City that could act on the petition.

The petitioners sought the Tepo after learning that the dolphins—which were imported from the Solomon Islands in 2008, 2009 and 2011—were to be reexported to Singapore.

The EII said it received a notice from the BFAR seeking its comment on the reexportation of the dolphins on Oct. 4.

The dolphins had been kept in Subic where they were trained to perform in aquatic shows while the Singapore marine attraction was being built.

The petitioners noted that other countries had banned the dolphin trade altogether.

Aside from the Tepo, the animal welfare groups asked for the nullification of dolphin import permits dating back to 2008 and the voiding of all such permits from the Solomon Islands.

The importation and exportation of the marine creatures violates the country’s international agreements and the Wildlife Preservation and Conservation Act.

The petitioners also asked the court to direct the respondents “to hold in custody the dolphins currently at Ocean Adventure at their expense until they are rehabilitated for release back to the wild.”

This is aside from the periodic reports the respondents must make before the eventual release of the dolphins.