Subic military base buildup vital to DND, US 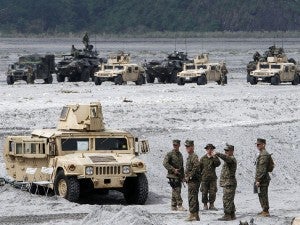 Going on in the Philippines, which has a mutual defense treaty with the United States, are joint exercises between US and Philippine marines, and the venue is exactly where the DND plans to build a base that a spokesperson for the department says is vital to the country’s security program.

CITY OF SAN FERNANDO—The plan of the Department of National Defense (DND) to develop a military base inside the Subic free port is a critical part of the country’s national security program, a defense official said.

It is also critical to the United States’ plan to “pivot” to Asia, a new military strategy that will see 60 percent of US warships shifting to the region by the end of the decade.

The planned shift, announced earlier this year, has drawn sharp criticism from Beijing, which sees it as a strategy to contain China, an emerging military power whose increasing aggressiveness in asserting its claims in Southeast Asian waters is causing worries in the region.

While Washington has sought to assure Beijing that the strategy is not intended to box in China, the United States has proceeded to conclude agreements with Singapore and Australia that will allow shelter for US war groups in the region.

Going on in the Philippines, which has a mutual defense treaty with the United States, are joint exercises between US and Philippine marines, and the venue is exactly where the DND plans to build a base that a spokesperson for the department says is vital to the country’s security program.

“The Armed Forces [of the Philippines] is modernizing in a very aggressive [way],” Peter Paul Galvez, DND spokesperson, told the Philippine Daily Inquirer by phone on Wednesday.

“In a few months, we are embarking in procurement and we intend to use those areas in Subic for our air platform and naval assets,” Galvez said.

“We have a big interest in the area,” he said, referring to the 200-hectare airport complex in the Subic free port, a former US naval base at the boundary between Zambales and Bataan provinces.

Officials of the Subic Bay Metropolitan Authority (SBMA) earlier announced that the agency wanted to convert the idle Subic Bay International Airport (SBIA) into a tourism and commercial hub, like Sentosa Island in Singapore.

But SBMA Chairman Roberto Garcia later said the plan would not proceed because the DND wanted to use the airport as a military base.

The DND, Galvez said, has asked Congress to approve P75 billion for the modernization of the military in five years.

Part of the modernization program is a plan that calls for the Philippine Air Force (PAF) to use SBIA at Cubi Point and the adjacent seaport, Galvez said.

The US Navy built the airport during the Korean War in the 1950s. It left Subic in November 1991, two months after the Philippine Senate rejected the extension of the Philippine-US military bases agreement.

The Philippine government, through the SBMA, converted Subic into a special economic zone and free port.

Galvez said discussions with the SBMA had not yet touched on leases.

“These are really needed, really perfect. These are very ideal. It is cheaper to locate [in Subic] than replicate [the facilities] elsewhere,” Galvez said.

“Subic can handle large aircraft. It has a deep sea,” he added.

Asked if the SBMA resisted the DND plan, Galvez replied, “They understand.”

“Having a military base in Subic is good for everyone there. It will support economic growth,” he said. “It is strategic for all. We are intently looking at it. We need the facilities.”

In exchange for the lease, the Air Force helps secure the international airport and aviation areas in the free port at Clark.

Galvez said he had no information yet on which units would move to Subic. There is no schedule yet for the construction of the military base there, he added.

Not aimed at China

Aware of the potential repercussions of the plan, Galvez said the base was not part of efforts to beef up the capability of the Philippines to deal with China’s aggressiveness in asserting its territorial claims in the West Philippine Sea.

China’s insistence that it owns the entire sea has led to a face-off between Philippine and Chinese ships at Panatag Shoal (Scarborough Shoal) from early April to mid-June, about the time US officials were going around the region explaining the new US military strategy.

But the plan to build a military base in Subic, Galvez said, has been existing since the 1990s. “It got waylaid for lack of funding,” he said.

“Our country needed strategic sites to monitor [our seas] and land, and these sites have national security implications,” he said.

The development of the new military base does not include engaging the US military for its use or even for shared use, he said.

Should troops from the United States or Australia use the Air Force facilities in Subic, this would be covered by the Visiting Forces Agreement with those countries, he said.

LOOK: John Regala discharged from hospital, on his way to recovery