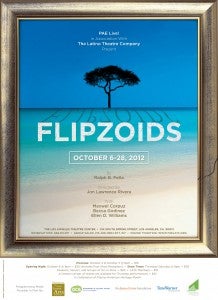 LOS ANGELES –   Identity. A connection to one’s homeland. A connection to each other. These are universal themes within the immigrant experience in America and ones that are explored in Ralph B. Pena’s play “Flipzoids” which opens at LATC on October 6 to launch Filipino American Heritage month in Los Angeles.  The production, a first-time partnership between PAE Live! and The Latino Theatre Company, is being directed by Jon Lawrence Rivera.

Aying is an aging “provinciana” woman who longs for the safety and memories of her beloved Philippines.  Her connection to her homeland brings her to the ocean and to the stories she grew up listening to and sharing with her family.  Her daughter, Vangie, is a new immigrant to America who sees the road to assimilating with mainstream culture through learning English vocabulary and art.  And while she loves her mother, she is burdened by Aying’s behavior.  Redford, the young Filipino-American, strives to understand Aying and her stories in an effort to define his own identity and to connect with a culture he wants to be part of. Or does he.

Most people know Becca Godinez from her performances in concert and through her recordings but not too many people here know her work as an accomplished actress.  Schooled in the theater world of Repertory Philippines as both an actress and director, Becca has had rare opportunity to stretch her acting muscle on the L.A. stage except for her stellar performances as part of the “Vagina Monologues” and “A Memory, A Monologue, A Rant and a Prayer” ensembles a few years ago, for which she received glowing reviews.  In “Flipzoids”, Becca makes her formal L.A. stage debut after a 30 year hiatus. Here, she shares her thoughts on the play, her take on playing the role of the beloved “Aying” and on her theatrical “rebirth”.

What does it mean for you, personally, to be able to act in theater after a 30 year absence?

It means many things.  It’s a rediscovery of a craft I had set my sights on but left behind for music.  Being a theatre arts major long ago, I thought that it would be my artistic home. Not so.  Now, experience, time and age add to a kind of appreciation at being given a chance to return.  Walking into rehearsals that first day felt like home.  It is a rebirth of me as an actress with a mature set of eyes.  It is sort of redemptive.

Do you relate to your character of Aying? How and why?

Yes – very much so.  In that Aying longs for home – we are the very same.  As many years as I have lived here, my thoughts wander back to that very grounding Pinoy soul – that resilient nature – that capacity to rise above – to laugh and cry easily because the Pinoy heart has a large capacity to love.  I smell Pinoy cooking – laugh at memories of parties – of family – or the corniest of Pinoy humor that only another Pinoy could possible understand or laugh at.  Aying is traditional and I find that although I have accepted new ideas and all that is novel, exciting and forward moving, I still hold on to those things that are uniquely Pinoy rooted and ingrained.

What does this play mean for Filipinos and Filipino-Americans?

I think that it clearly says – it’s okay to move away – to want to be and do better – to improve one’s lot in life.  However, it also says, do not forget where it is that you are from.  Do not cling too tightly to the past to where it stifles your movements, decisions, choices…but as well – do not negate or erase it completely.  We have a personal identity as a people, a common consciousness that allows us to “belong” somewhere even as we uproot our lives and travel to different shores. And finally, when we are on foreign shores, we have a responsibility to share our culture with our young – to give them a sense of history, pride and identity that they can run back to whenever they choose to seek or find their roots.

What have you learned about yourself doing this play?

I have learned that I love the craft.  That I am fulfilling a long ago dream of walking the streets of downtown “somewhere” to rehearse and then perform at a professional theatre in the US.  That I enjoy the creative process.  That I am pliable – willing to bend – willing to learn. That at this age, my memory isn’t so bad after all!  That I had forgotten how intense the rehearsal process is so that my aging body has taken a beating. That it doesn’t matter that I ache because it’s a good ache. That I am so much more compassionate.  That I have a husband and daughter who are truly happy for me.  That actors are generous. That I am humbled. That my cup runneth over.  That I return home each day so grateful to God for the opportunity that’s been given me.