Bill to revive Philippine garments industry refiled in US Congress

MANILA, Philippines—A bill that will revive the fading garments trade between the Philippines and the United States has been reintroduced in the US Congress amid a strong lobby by Manila.

The SAVE Our Industries Act or SAVE Act was re-filed as  a “win-win” legislation expected to give the two countries textile and apparel  industry a much-needed boost.

“It is critical to the survival of the Philippine apparel industry, and will result in a significant increase in US textile exports to our country.  It is a genuine win-win for both countries,” said Philippine Ambassador to the US Jose L. Cuisia, Jr.

The SAVE Act would allow for duty-free entry into the United States of certain garments made in the Philippines using US textiles.

It is seen to generate $3 billion in Philippine apparel exports and create 600,000 jobs. US textile exports to the Philippines and other Asean countries, meanwhile, are expected to surge up to $500 million, generating 2,000 jobs in the fabric mill sector.

In the US Senate, SAVE Act was reintroduced by senators Daniel K. Inouye and Roy Blunt. Inouye, who was on an official visit to the Philippines in April, was urged by President Benigno Aquino to file the legislation and help revitalize the industry.

The garments and textile sector has been experiencing a steady decline in export growth since 2006. In 2010, the Philippine garment and textile exports amounted to $1.2 million, a far cry from the $2 billion export receipts prior to the end of the quota regime.

Before, the Philippines had exports quota of garment to the US and Europe.

The Save Act is expected to provide enough incentives for garments exporters in the Philippines to expand their operations through a grant of preferential treatment from the United States.

The bill supports the country’s inclusion in the 809 Program, which gives various benefits to US trading partners that produce garments from US-made fabrics or yarn. 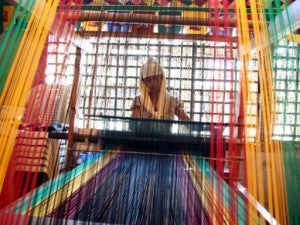 Garment manufacturers from Mexico, the Caribbean and Andean countries already enjoy preferential treatment, with benefits ranging from lower duties to quota-free and duty-free entry into the United States.

Under the 809 component of the bill, US-made yarn and fabrics cut and wholly assembled in the Philippines would qualify to reenter the US duty-free.

Garments made of US spun yarn or extruded yarn formed in the Philippines, on the other hand, would be allowed to reenter the US at half of the most favored nation (MFN) duty.

Foreign Affairs Secretary Albert del Rosario, who was in Washington D.C. when the Senate bill was re-filed, said “this is a very important milestone in the relationship between our two countries.”

Del Rosario expressed optimism that “with the leadership of Senators Inouye and Blunt, we are hopeful that Congress will enact the SAVE Act in the near future.”