Binay to lead PH delegation for Calungsod’s canonization in Vatican 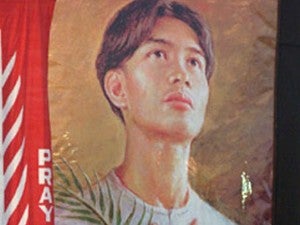 MANILA, Philippines—Vice President Jejomar Binay will be representing President Benigno Aquino III in witnessing, along with thousands of Filipinos, the canonization of Blessed Pedro Calungsod on October 21 at the Vatican City.

“It is an honor to lead my fellow Filipino Catholics in witnessing this historic event. Blessed Pedro Calungsod’s life was one of service and I pray that his dedication and sacrifice will inspire the Filipino youth to live their lives in service of their fellowmen,” Binay said in a statement Thursday.

“I join the people of Cebu and the entire nation in this most joyous occasion and pray that the canonization of Blessed Pedro Calungsod will further strengthen our faith in the Almighty and our unity as a people,” Binay added.

Pope Benedict XVI will name Calungsod, who died a martyr when he was killed in a Catholic mission in Guan Marianas in April 1672, as the second Filipino saint, next to San Lorenzo Ruiz de Manila.

The Catholic Bishops’ Conference of the Philippines (CBCP) had earlier said that as early as Wednesday next week, about 50 bishops and thousands of Filipino pilgrims will be in Vatican for the canonization rites. It had also noted that Calungsod’s three-foot tall statue would be flown to Vatican on Tuesday.

In his statement, Binay said that the canonization rites for Calungsod and six others would begin with a holy mass at Saint Peter’s Square and that vespers and a procession of the new saints’ icons will be held at the Chiesa di Santa Pudenziana later in the evening of October 21.

Binay will also be attending  the 8 a.m. thanksgiving mass to be celebrated on October 22, the day after the canonization.

Meanwhile, the Cebu Archidiose has announced activities in Cebu after the canonization, which was also expected to be attended by a million pilgrims.

The activities include preparations for processions in all parishes of Cebu City and a fluvial procession of Calungsod’s statue along the Mactan Channel.

The town of Ginatilan in Cebu, the hometown of Calungsod, has formed a committee to trace the Calungsod family tree.

Aquino has issued Proclamation No. 481, declaring October  21 as a national day of celebration on the canonization of Calungsod.