Peace deal sealed but to most Filipino refugees, Malaysia is home 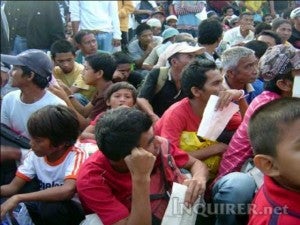 KOTA KINABALU—Lijah Daliara left her home province of Tawi-Tawi in the Philippines over four decades ago and has no more ties with the village after she and her family, like thousands of others, fled the war in Mindanao.

A Bajau-Ubian, Lijah said Sabah had become home for her, adding that all her five children and grandchildren were born in the state.

“I am settled here; I don’t have any interest in going back to the Philippines,” said Lijah, who lives at the Kinarut refugee settlement, about 40 kilometers from Kota Kinabalu.

“I hope the Malaysian government will not force us to leave Sabah,” said Lijah, who holds a special IMM13, an immigration visitor pass issued to refugees and their families.

According to statistics from Malaysia’s Immigration Department, there are about 60,000 registered Filipino refugees and their families in the state, most of whom are in four refugee settlements in Telipok, Kinarut, Tawau and Sandakan.

Like Lijah, who works as a domestic helper, many are reluctant to return to their homeland that continues to be torn by violence and kidnappings.

Some have become naturalized Malaysian citizens over the years. The Star/Asia News Network