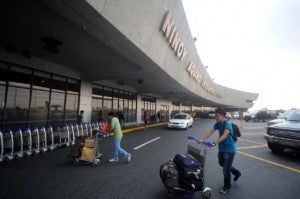 MANILA, Philippines—The Bureau of Immigration said on Wednesday it would be deploying 200 more new immigration officers to the Ninoy Aquino International Airport amidst the steady increase in the number of international travelers who enter and exit the country daily.

BI Commissioner Ricardo David Jr. said the Department of Budget and Management has granted the bureau’s request for authority to hire more immigration officers to address its problem of manpower lack at the airports.

David said it was the second time in 2012 that Budget Secretary Florencio Abad had approved his request for additional posts of Immigration Officer I in the BI plantilla.

The commissioner said notices inviting interested applicants for the job would soon be published in newspapers and on the BI website. The DBM earlier authorized the BI to hire new 100 immigration officers.

“As usual, these applicants will undergo a rigorous selection process, including written tests and panel interviews, to ensure that only the best and qualified are appointed to these posts,” David said.

The immigration officer post is the most coveted job in the BI as it involves being in the frontlines of an agency dubbed as the gatekeeper of the country.

As gatekeepers they are responsible for assessing the admissibility of foreigners entering the country and for processing all international travelers that enter and leave the various ports of entry nationwide.

David said he sought the hiring of the additional employees due to the perennial problem of long passenger queues at NAIA’s immigration counters that has been the object of complaints from the traveling public.

Lawyer Ma. Antonette Mangrobang, BI spokesperson and acting intelligence chief, said the bureau has not been able to hire enough employees due to budgetary constraints.

“We will continue to ask the DBM for authority to hire more immigration officers but also intelligence agents who will help guard our ports and thwart the entry of illegal aliens,” she said.