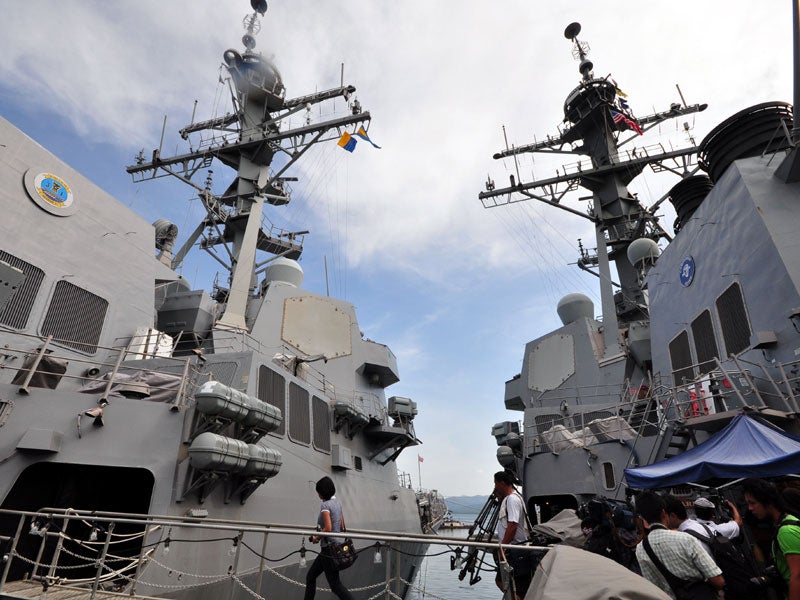 Two US Navy guided missile destroyers await joint exercise to begin at the Puerto Princessa Port in Palawan Wednesday. More than 1,200 US and Philippine Navy personnel began 11 days of exercises Tuesday that would include live-fire drills, tracking and interdiction and patrolling maneuvers in the Sulu Sea off the western Philippine province of Palawan, which lies near the disputed Spratly Islands. AP/Xinhua

MANILA, Philippines—The Department of National Defense has welcomed a US Senate resolution that “deplores” China’s use of force in the potentially resource-rich West Philippine Sea.

Defense Secretary Voltaire Gazmin said the resolution is an assurance that the Philippines can rely on the United States to defend its claimed territories in the Spratly Islands.

“This is good for us because we have an assurance that at least the US will extend assistance in case there is a conflict in the area,” Gazmin said Friday.

Tensions in the West Philippine Sea region have escalated in recent weeks, with the Philippines and Vietnam alarmed at what they say are increasingly aggressive actions by Beijing in disputed waters.

The US Senate’s symbolic resolution “deplores the use of force by naval and maritime security vessels from China in the South China Sea” and urges a “multilateral, peaceful process to resolve these disputes.”

The Senate measure also “supports the continuation of operations by the United States Armed Forces in support of freedom of navigation rights in international waters and air space in the South China Sea.”

Gazmin said it simply shows that the US Senate is not pleased with the way China asserts its claims over the contested 750 reefs, islets, atolls, cays and islands in the West Philippine Sea.

He said the US involvement in the West Philippine Sea territorial issue could “result to a stalemate.”

But Gazmin said it was not necessary for the US to deploy a large number of troops in the West Philippine Sea.

“They don’t necessarily have to deploy a big number of troops. What is important is that they ensure that there is no atrocity in the area of dispute,” Gazmin said.

The Department of Foreign Affairs has filed several diplomatic complaints on China’s alleged incursions in Manila-claimed territories in the West Philippine Sea.

China dismissed the US Senate resolution, saying it “does not hold water” as it maintained that the disputes “should be resolved through direct negotiations between the directly concerned parties.”

Recent incidents have put the security spotlight on the West Philippine Sea, a potentially oil-rich area where China has sometimes overlapping disputes with Vietnam, the Philippines, Brunei, Malaysia and Taiwan.

Vietnam recently carried out live-fire drills and the Philippines ordered the deployment of its naval flagship after accusing China of aggressive actions. With Agence France-Presse