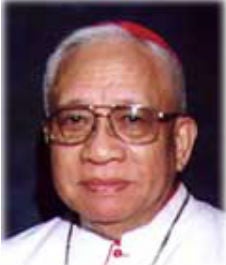 The cardinal came to the defense of Fr. Cristobal Garcia, who was linked by Cristy to the trade in illegal ivory, saying the priest had told him the journalist “misquoted him.”

Because of his deception and for what he did, Vidal claimed, Christy was not welcome in Cebu.

The Department of Environment and Natural Resources (DENR) and the National Bureau of Investigation (NBI), however, are taking Cristy’s exposé seriously. They have has asked Garcia to submit proof that the ivory statues in his collection were acquired legally.

The Philippines has banned the trade in ivory in support of an international wildlife conservation convention that hopes to stop the slaughter of elephants for their tusks.

Garcia, the Church later revealed, had earlier been suspended by the Vatican on allegations of child sexual abuse while serving in a parish in Los Angeles, California, in 1986.

In his blog (bryancristy.com), the author commented: “Cardinal Ricardo Vidal of Cebu would like to have me declared ‘persona non grata’ for my story “Blood Ivory: Ivory Worship.”  No word yet how Cardinal Vidal would treat Monsignor Garcia, the alleged pedophile and ivory afficionado featured in Blood Ivory, whom Vidal promoted to Monsignor and made a leader in an archdiocese of four million Catholics.”

Christy, before he became a full-time writer, practiced international law in Washington, D.C. He is also a certified public accountant. He is the author of the nonfiction book “The Lizard King.”

Vidal aired his sentiments on Cristy over the weekend in a televised interview. He said he was upset over how Christy portrayed the Church and Garcia.

Christy, in his article featured in the October edition of National Geographic, claimed Garcia had suggested how he could smuggle ivory icons to the United States. Christy underlined the role of the Catholics, with their penchant for religious icons, in the illegal trade.

Vidal said he had talked to Garcia last week and the embattled priest had claimed that the suggestion on ivory smuggling did not come from him but from “a woman,” the cardinal said.

Vidal said Christy had misquoted Garcia. He said the reporter also deceived the people he interviewed on what his article would be about.

“Bryan Christy tried to tell the people that he was trying to publish something about the devotion to Sto. Niño and all of a sudden this comes out in contrast,” he said in the TV interview.

Fr. Achilles Dakay, spokesperson of the Cebu Archdiocese, said Christy was a definitely “a liar.”

“That’s what we’re challenging the lay people because of the lies he wrote,” Dakay said.

Last Friday, Church security guards prevented a team from the DENR and the NBI from inspecting a shrine set up by Garcia in Talisay City. The Church demanded a search warrant and told government agents to talk to their lawyers.

DENR regional executive Jose Layese Jr., head of the Protected Areas and Wildlife Division, and director Mundita Lim  sent Garcia a letter on Sept. 27 asking him “to furnish to this bureau proofs of legal acquisition of all religious items made or in-laid with ivory that are in his possession or record.”

Garcia could not be reached for comment. Church officials said last week that he was ill and resting.