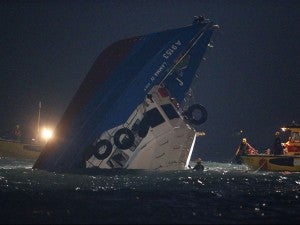 Rescuers check on a half submerged boat after it collided Monday night near Lamma Island, off the southwestern coast of Hong Kong Island Tuesday, Oct. 2, 2012. The boat packed with revelers on a long holiday weekend collided with a ferry and sank off Hong Kong, killing at least 36 people and injuring dozens, authorities said. AP/Kin Cheun

MANILA, Philippines—The Department of Foreign Affairs on Tuesday said there were no Filipino casualties in the deadly ferry collision in Hong Kong’s Victoria Harbor as search and rescue efforts continued to locate the missing.

Citing reports from the Philippine Consulate in Hong Kong, DFA spokesperson Assistant Secretary Raul Hernandez said that no Filipinos were on board the tour boat that capsized off Lamma Island on Monday after it collided with a ferry.

“As of 9:40 a.m. today, Hong Kong authorities have said that no Filipino casualties were involved in the collision of two passenger vessels near Lamma Island on the evening of October 1, per report of the Philippine Consulate General,” Hernandez said in a text message Tuesday.

He said the Philippine consulate will continue monitoring developments of search and rescue crews continue efforts to save people believed to be still trapped in the partially-submerged vessel.

Reports from Hong Kong showed that a boat carrying at least 120 passengers collided with a passenger ferry near Lamma Island Monday night. More than 100 people have been rescued from the two vessels and rushed to hospitals around the city, reports from the ground said.

Read Next
Warning out on newest SARS strain called ‘coronavirus’
EDITORS' PICK
‘Opportunity’: PH senior population on the rise
Powered by style, innovation and passion
House starts inquiry into sugar import mess
Pimentel: Gov’t buyers knew of cheaper laptops but still got expensive ones
A laptop that maximizes your WiFi so you can maximize your productivity
House energy committee chair Arroyo bats for cheap electricity
MOST READ
Imee Marcos bares illegal importation of white onions
U.S. actor Anne Heche is taken off life support 9 days after car crash and dies
PVL: Celine Domingo gets big surprise as Creamline’s Finals MVP
Pimentel: PS-DBM knew of cheaper laptops but still got expensive ones
Don't miss out on the latest news and information.