More fun for snatchers in Manila as they run rings around tourists in Intramuros, Luneta 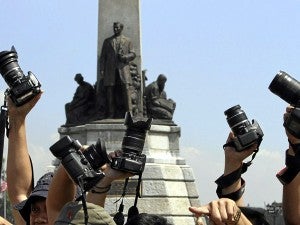 MANILA, Philippines—Having “more fun in the Philippines” supposedly does not include spending time in a police station to report a robbery, but that’s exactly what happened to Chinese tourist Ivana Liu of Shanghai and earlier to American national Ma. Teresa Rose Kennedy this week.

The two women were the latest victims of “snatchers” or thieves prowling the streets of Manila apparently with an eye for unsuspecting foreigners.

Liu said she and her mother had just arrived in Manila early Thursday en route to the resort island of Boracay. After dropping off their luggage at their hotel, they decided to spend a few hours sightseeing.

But as they were walking along Bonifacio Drive in Intramuros at around 11 a.m., “five men surrounded us and snatched the platinum necklace of my mother,” Liu told the Inquirer, her voice still shaking after filing a complaint at the Manila Police District headquarters.

Her mother sustained scratches and cuts on her neck, she said.

Liu said they were planning to spend a day touring Intramuros and Rizal Park (also known as Luneta) before going to Boracay, the latter highly recommended by a friend.

“The police station is not in our itinerary, (yet) we are here waiting for a police report,” Liu said in frustration.

A similar encounter marred the sightseeing tour of the 65-year-old Kennedy on Tuesday.

The American woman and wife of an Asian Development Bank consultant filed a robbery complaint in the MPD after she was robbed of her earrings at Rizal Park.

According to Cayetano, it was the “fourth time” Kennedy had been targeted by robbers in the metropolis, though she only reported the latest incident.

“I am now angry. This is the fourth time that I have been robbed,” Kennedy told the MPD in her statement.

As these latest cases of victimized foreigners emerged in Manila, a neighboring city that hosts the country’s premier airport has formed a special 75-man security force to keep tourists safe.

“There is this image that security in Metro Manila is lax. Rightly or wrongly, people think that the crime rate is high and that our streets are unsafe for tourists,” Calixto conceded in a statement.

Calixto said members of this tourist police underwent a three-week training program given by the Department of Tourism.

“They are tour guides and policemen at the same time. They are the best person to ask about directions and about tourist attractions in the city,” he said.—With a report from Niña Calleja