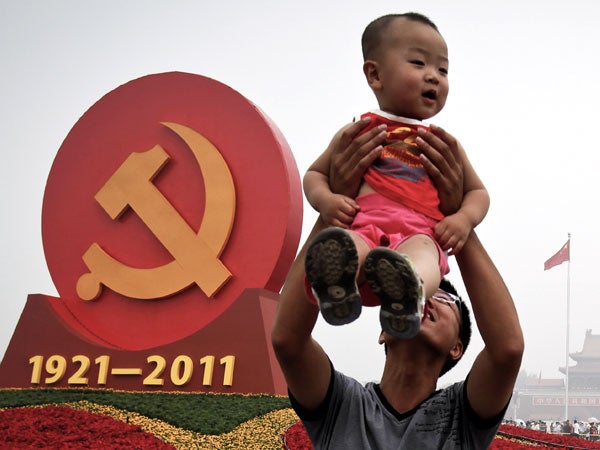 BEIJING—China is marking the 90th birthday of the Communist Party with its typically over-the-top celebrations and an unusually rancorous debate about whether the government needs a major change in direction to sustain the country’s resurgence.

Percolating for years among academics and commentators, the debate pits those who want a transition to more democratic government against those who want a more egalitarian, populist authoritarianism — a group known as the “new left.”

The discord has gathered steam with the approach of Friday’s anniversary and mounting social tensions over corruption and a widening wealth gap. It has become a factor in the jockeying for party leadership and led to heated online exchanges, including calls to charge an octogenarian economist with sedition.

Underlying the debate is a sense that the reforms that mixed capitalism with state control and transformed China from poverty to global power have run their course, entrenching a new elite, while leaving out others.

“People see that the reforms have led to all sorts of social problems and costs, and those costs are being borne by farmers, workers and migrant laborers,” said Yang Jisheng, the elderly editor of a liberal magazine aimed at retired party members. “The dissatisfied cut across the left, the right and the middle. The left doesn’t like the market economy. The right dislikes that there’s no liberalization, no democracy. And the middle wavers back and forth.”

Whether China veers right or left matters to a world that looks to torrid Chinese growth to buoy the global economy, but has trouble meshing that with its closed, authoritarian political system.

Much of the discord has played out in media reports and blogosphere comments, though it has also erupted into view among the leadership.

Over the past year, Premier Wen Jiabao has repeatedly cited the need for political reforms to ensure China’s continued growth. The head of the national legislature and the party’s law-and-order czar have both shot back, vowing not to adopt Western-style democracy.

“All of a sudden you seem to have left and right going after each other,” said Joseph Fewsmith, a China politics expert at Boston University.

The public dissension is unusual for a leadership that has tried to suppress outward signs of debate in the two decades since Tiananmen Square, when open splits encouraged the pro-democracy demonstrators and delayed the crackdown. In the aftermath, the party marginalized its left and right, morphing into an institution of technocrats and officials bound together more by ambition and connections than ideology.

Official celebrations to mark the party’s founding in 1921 gloss over the divisiveness. Party propagandists have released a torrent of politically correct entertainment to promote the theme that the communist government has made China prosperous and strong.

The public has largely ignored the hoopla. “It is just a short-time campaign, and when July 1 is over, everything will return to where it used to be,” said Jiang Xiaoyu, a cultural critic and film director.

A centerpiece is group sing-a-longs of “red” songs from the 1950s, when older Chinese say people were unified in purpose to rebuild the country — in contrast to today’s goal of pursuing wealth. Songfests have been staged in schools and offices across China.

But the red songs campaign has also become part of the larger debate.

The campaign’s most visible champion is Bo Xilai, the party secretary of Chongqing, the megacity that sprawls astride the Yangtze in central China, who is believed to want a top post in next year’s leadership succession.

His supporters say the red songs are the cultural component to policies meant to improve people’s lives. They include an anti-crime crackdown, a splurge to build low-cost housing and incentives to encourage farmers to sell their land and move to the city in exchange for better social benefits.

“It’s similar to the New Deal,” said Cui Zhiyuan, a leading new left scholar who took leave from prestigious Tsinghua University to be an adviser to the Chongqing government. Bo, Cui said, wants not only to govern, but “to win the hearts and minds of the common people.”

Detractors say Bo and the Chongqing model portend a shift toward more topdown rule, and they worry that the nationwide rollout of the red songs campaign signals Beijing’s tacit endorsement of the new left.

He Weifang, a law professor at Peking University and an increasingly vocal critic of the new left, said the events in Chongqing were like a return to the radical, abusive power of Mao’s era. “There’s a sudden sense of going back in time, of seeing a repeat of the Cultural Revolution. The ideals of rule of law are sinking into ruin,” he wrote on his blog in April.

Retorts on websites associated with the new left called He a foreigner in all but looks bent on trying to turn China into America. One branded him a “slave of the West.”

Another new left website, Utopia, circulated petitions calling for elderly economist Mao Yushi to be charged with sedition after he wrote in an essay that revolutionary leader Mao Zedong’s legacy — with its policies that led to the deaths of tens of millions — should be reassessed.

One question is whether Bo believes in the new left or if it’s a tactical move to gain entry to the leadership. “It’s very hard to see China embracing full populism,” said Fewsmith, the China expert, “because populism works against the elite too.”