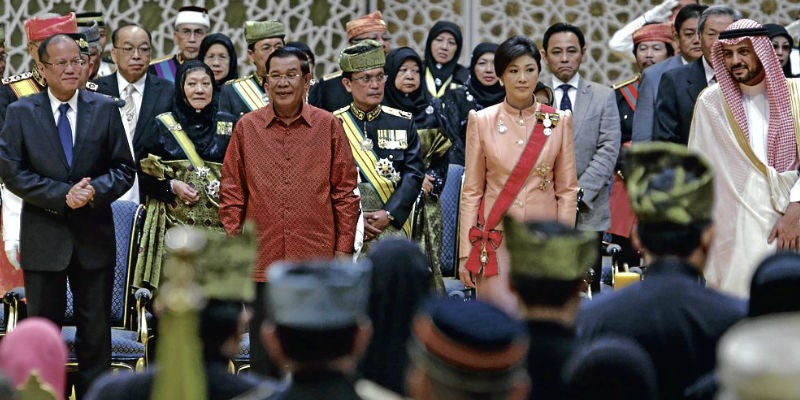 BANDAR SERI BEGAWAN—Glittering jewels and the echoes of a 17-gun salute marked the climax of wedding celebrations for the daughter of one of the world’s wealthiest men, the sultan of Brunei.

Princess Hajah Hafizah Sururul Bolkiah, 32, and Pengiran Haji Muhammad Ruzaini, 29, were presented to the royal court in a lavish ceremony at the sultan’s 1,700-room palace on Sunday attended by several foreign heads of state, including Philippine President Benigno Aquino.

Although the couple were legally wed on Thursday after signing the marriage contract, Sunday’s event marked the height of more than a week of festivities in the tiny oil-rich Muslim sultanate on Borneo island.

The bride, dressed in a crystal-beaded beige and silver gown, was ushered into the throne room by 16 royal guards carrying ceremonial spears and shields.

She was seated at the head of the hall in front of 3,000 guests, including Mr. Aquino, Thai Prime Minister Yingluck Shinawatra and Cambodian Prime Minister Hun Sen.

Visibly nervous, the groom, wearing beige and gold brocade to complement his wife’s ensemble, was escorted to the bridal dais where the sultan took Ruzaini’s hand and placed it on the bride’s forehead—a symbolic blessing and gesture of affection in Malay culture.

The monarch also bestowed the groom with the royal title “Yang Amat Mulia Pengiran Anak,” which roughly translates as “Son of His Highness” and is reserved only for the upper tiers of Brunei’s aristocracy.

Two pots of crystal flowers, with eggs tied on to the stalks, were placed next to the bride and groom to represent the hope of a fertile marriage.

The 20-minute ceremony concluded with the state religious leader reading a prayer for the newlyweds asking for God’s blessing of the union.

As the smiling couple were ushered out of the room by the bride’s younger brother, Prince Abdul Mateen, they took turns to kiss the hands of the royal family, including the Sultan Bolkiah and Queen Saleha.

A state banquet was to be held in the evening, where Malaysian Prime Minister Najib Razak and other foreign dignitaries were expected to attend.

Queen Elizabeth II also sent a message to the Brunei royal family—which has ruled the sultanate for 600 years—wishing the newlyweds “a happy wedding day and many blessed years together.”

The pomp and pageantry of the royal wedding is a rare source of excitement in Brunei, which is known for its slow pace of life and lack of nightlife—alcohol is largely banned under Islamic practice.

It is the first time one of the sultan’s children—five sons and seven daughters from three marriages—has married since 2007.

Hafizah, who has a degree in business administration, is the fifth child of Sultan Bolkiah and Queen Saleha and works as an officer at the finance ministry. Ruzaini is a civil servant in the prime minister’s office. AFP