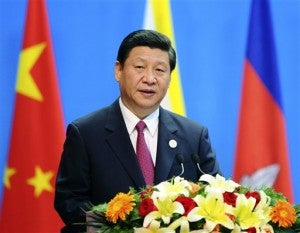 No one blinked during the talks between Philippine Interior Secretary Manuel Roxas and Chinese Vice President Xi Jingping on their countries’ territorial dispute in the West Philippine Sea (South China Sea) on Friday.

Despite the reports of the willingness of both sides to improve their relations, the Philippine Daily Inquirer learned Sunday that “substantial gaps” continued to separate the Philippines and China in their search for a solution to their dispute over Panatag Shoal in the West Philippine Sea.

“There was a mutual assertion of sovereignty,” a Malacañang official said in an interview with the Inquirer, explaining the “mutual expressions of positions and viewpoints” by both sides during the meeting between Roxas and Xi.

President Benigno Aquino sent Roxas as his special envoy to the China-Asean (Association of Southeast Asian Nations) Expo in Nanning, China, tasking him with conveying to Chinese President Hu Jintao through Xi the Philippines’ desire to improve relations with China and help find a peaceful solution to the territorial dispute between the two countries.

Mr. Aquino himself was to deliver that message to Hu in a bilateral meeting on the sidelines of the Asia Pacific Economic Cooperation (Apec) leaders’ summit in Vladivostok, Russia, on September 9, but the meeting fell through due to a conflict of schedules.

The Palace official, who spoke on condition of anonymity because he was not authorized to speak on the issue, said Roxas and Xi took “divergent positions” in their discussion of the Panatag Shoal dispute.

When asked if China insisted on its claim of sovereignty in almost the entire West Philippine Sea, the official said “neither side was expected to give up its claim.”

Without elaborating, the official described the extent of disagreement between the two countries as a “chasm,” indicating that China refused to recognize the Philippines’ rights to Panatag Shoal and that the Philippines insisted the shoal was within its exclusive economic zone.

The Philippines and China are also disputing ownership of other islands, reefs and atolls in the Spratlys chain in the middle of the West Philippine Sea. But Vietnam, Brunei, Malaysia and Taiwan also claim those parts of the sea believed to be sitting on vast deposits of oil and gas. The West Philippine Sea also has rich fishing grounds and shipping routes where half of the world’s cargo passes.

Roxas will explain what really happened in Nanning on Monday, when he reports to the President, the Palace official said.

Both Roxas and Mr. Aquino were out of the country Sunday. The President flew to Bandar Seri Begawan in Brunei Sunday for the wedding of Sultan Hassanal Bolkiah’s youngest daughter, Princess Hajah Hafizah Sururul Bolkiah. Both the President and Roxas were expected to return to Manila Sunday night.

The Palace official said that what Roxas achieved in Nanning was the reestablishment of direct links to China’s leadership, as Xi is widely expected to take over from Hu in a leadership change next year.

“After mutual expressions and positions were stated, no conclusions were drawn. Both sides will consider, then talk again,” the official said.

A statement released by Malacañang on Saturday highlighted gains achieved during the meeting, saying the “Philippines and China expressed a mutual desire to resolve the outstanding issues concerning both countries while moving forward with their bilateral relations.”

Presidential spokesperson Edwin Lacierda, who accompanied Roxas to the meeting, said “the Chinese vice president expressed appreciation to President Aquino in sending Roxas which showed the importance of the bilateral relations of the two nations for the Philippines.”

“This showed the importance that President Aquino attaches to Philippines-China relations,” Lacierda quoted Xi as saying.

Roxas told Xi that Manila hoped to have friendly relations with Beijing and overcome difficulties caused by the territorial row, Lacierda said.

Another Palace press officer, deputy presidential spokesperson Abigail Valte, spoke of a “thawing of relations” between the Philippines and China in a radio interview Sunday.

Valte said the administration recognized that the Philippines had a “multilevel relationship” with China and that it wasn’t talking to China about the West Philippine Sea dispute only.

She mentioned tourism and trade as part of the Philippines’ “good working relationship” with China.

The Philippines, she said, will continue to work on the “different facets” of its relationship with China despite the territorial dispute in the West Philippine Sea.

Valte acknowledged that the relations between the two countries had been soured by the dispute, but said that their bilateral relations had been “revived.”

To improve the relations further, Valte said the administration would continue to pursue a peaceful resolution of the territorial row in the West Philippine Sea.

And the Philippines will “refrain from doing anything” that will cause a flaring anew of tensions in the sea, she said.