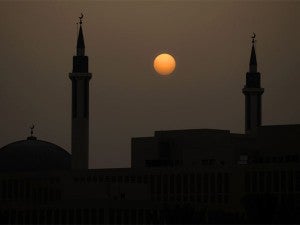 The sun sets behind the minarets of Imam Muhammad Ibn Saud Islamic University mosque in Riyadh, Saudi Arabia, Sunday. The kingdom has said it will not issue new work permits for maids from the Philippines and Indonesia. AP

RIYADH—Saudi Arabia announced Wednesday it would stop granting work permits to domestic workers from the Philippines and Indonesia, following hiring conditions imposed by the Asian countries.

The ministry of labor said it would “stop issuing work visas to bring domestic workers from Indonesia and the Philippines, effective from Saturday” due to “the terms of recruitment announced by the two countries,” according to a statement carried by state news agency SPA.

“The ministry’s decision coincides with its great efforts to open new channels to bring domestic workers from other sources,” said the statement in English quoting the ministry’s spokesman Hattab bin Saleh al-Anzi.

Last week Indonesian President Susilo Bambang Yudhoyono denounced the beheading in Saudi Arabia of an Indonesian maid and accused Riyadh of breaking the “norms and manners” of international relations.

His comments signalled Indonesia’s growing anger over the treatment of its manual laborers in the Gulf countries, after a spate of cases of abuse and killings.

Ruyati binti Sapubi, 54, was beheaded on June 18 after she was convicted of killing her Saudi employer, prompting Indonesia to recall its ambassador in Saudi Arabia for “consultations.”

Indonesia also announced a moratorium on sending migrant workers to Saudi Arabia, where hundreds of thousands of Indonesians toil as maids and laborers.

Saudi Arabia and the Philippines have also clashed over the working conditions of Filipina domestic workers in the oil-rich kingdom.

Earlier this year the Philippines asked Saudi Arabia to guarantee higher pay for Filipina housemaids but the request was turned down.

The Philippines demanded $400 in monthly wages for housemaids but Saudi authorities offered a base monthly salary of $210, Filipino labor official Carlos Cao told Agence France-Presse in Manila in May.

Rights groups say millions of mostly Asian domestic workers are regularly exposed to physical and financial abuse in Saudi Arabia and the Gulf states due to poor or absent labor laws.